How To Stream The Indian Premier League From Anywhere In 2021?

The Indian Premier League 2021 — the biggest event of the year, full of chills, thrills, and celebrations, with fans glued to their screens, to not miss a minute of the action.

Between the 9th of April and 30th of May, eight teams will fight to secure four playoffs. Come final; only two will be left competing for the cup.

Until now, the Royal Challengers Bangalore (RCB), under Virat Kohli’s leadership, have been a force to reckon with, leading with four wins out of four and eight points.

Chennai Super Kings (CSK) and Delhi Capitals (DC) are 2nd and 3rd respectively, both with three wins and six points on the table. Mumbai Indians (MI) closely follow the pack with four points, then the Sunrisers Hyderabad (SRH), with two points.

And to round off the table, Kolkata Knight Riders (KKR), Punjab Kings (PK), and Rajasthan Royals (RR); rank 6, 7, and 8, respectively.

All teams are packed with local and international talents; let’s see how things unfold by the 30th of May!

Watch all of the Indian Premier League games from anywhere!

The Indian Premier League Schedule And Highlights In 2021

Due to the growing number of COVID cases, this year’s IPL is not open to the public — all matches are behind closed doors. So, the only way to watch it is through cable and streaming services.

However, for those outside India, sports channels may not telecast the Indian Premier League, prompting fans to look for another solution

For those in Australia, Kayo offers IPL live streaming, but it costs $25 a month. 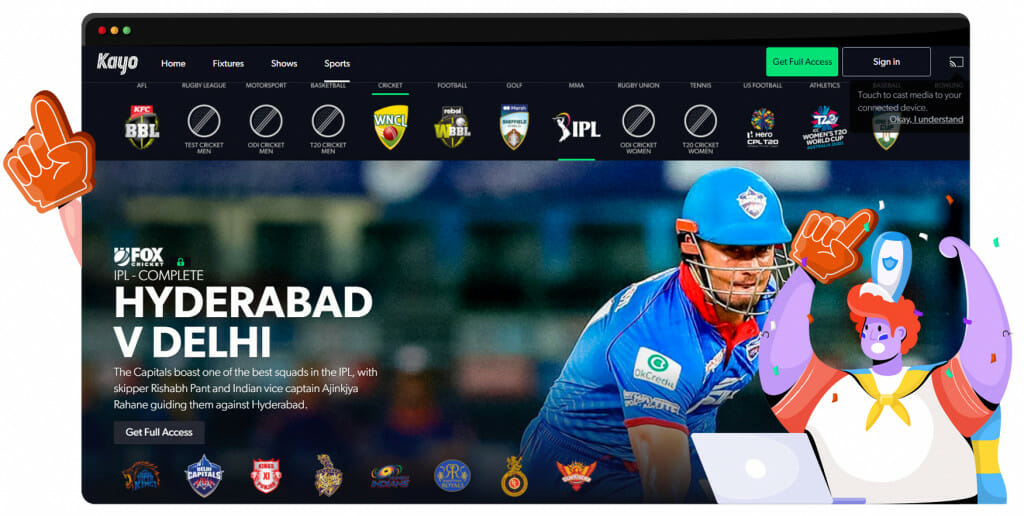 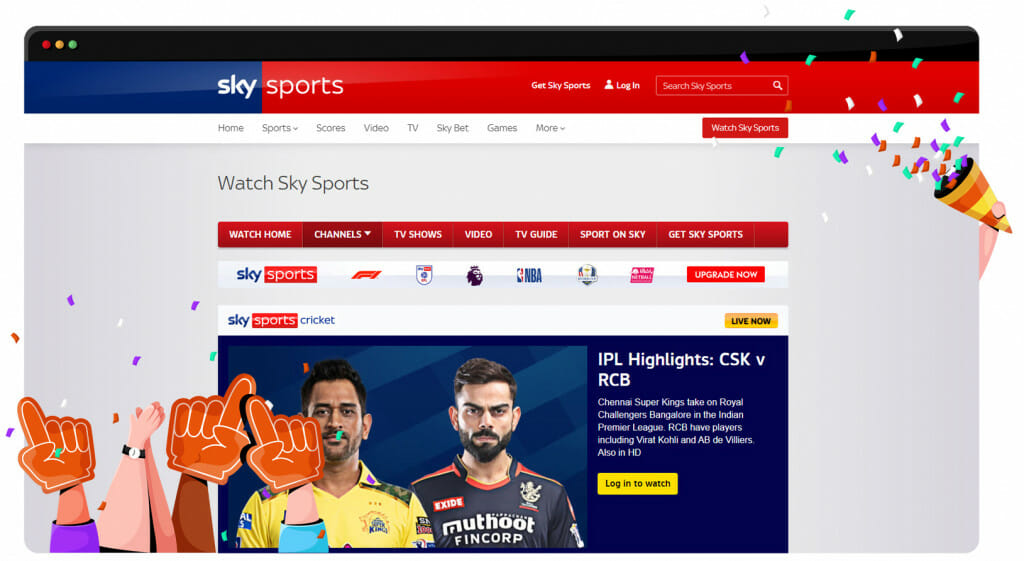 Furthermore, if you are in the US, you have two options: Either subscribe to Willow TV, which only cable subscribers can use, or you can get Hotstar US, which will set you back $49.99 + taxes per year on the annual package and $19.99 + taxes per month on the monthly subscription.

Your best bet is to subscribe to Disney+ Hotstar India, which costs 299 INR. Or you can go for the annual package that costs 1499 INR.

Yes, the price plans for the US and India are significantly different! 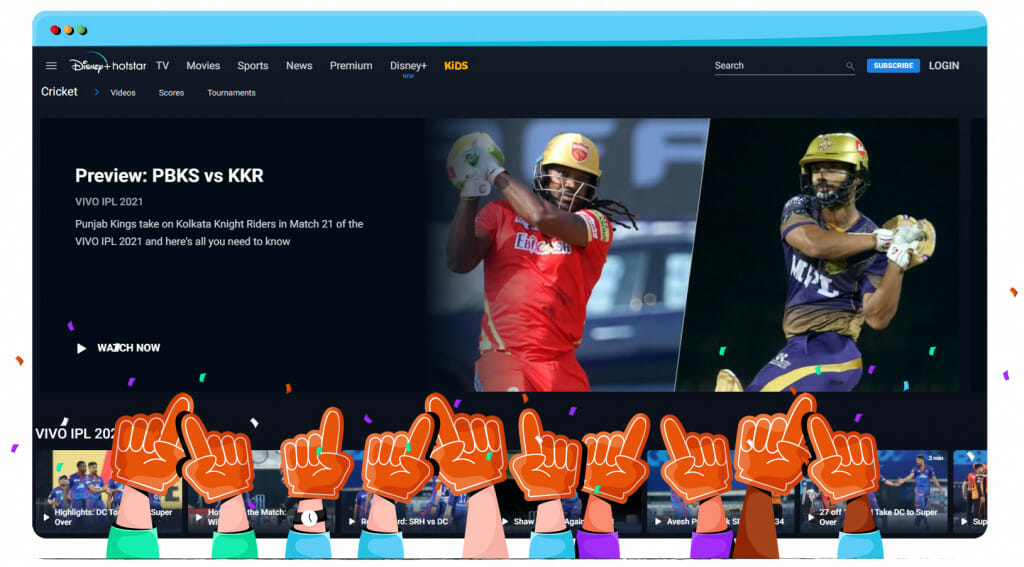 The only problem is that the service is geo-restricted outside India! 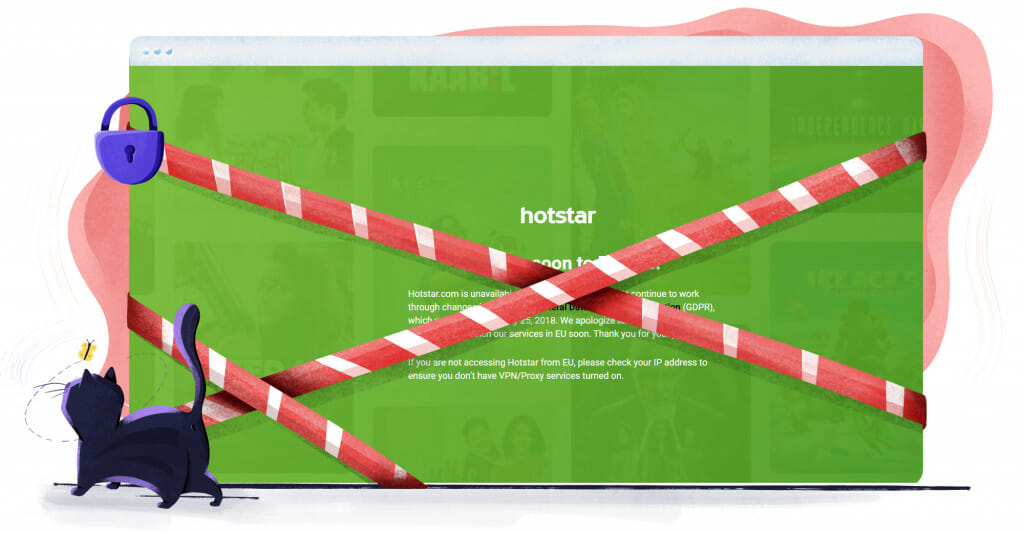 How Can You Get Hotstar From Anywhere?

True fans of cricket are already scouring the Internet for free livestreams of the games hoping to find at least some glimpse of the games.

But sadly, these searches only lead to a rabbit hole of malware-ridden links.

However, there is an issue (isn’t there always?). Since Hotstar is restricted outside of India, you might not be able to view it if you are stuck outside of the country, even if you have a subscription.

But even if that’s the case, you can still work around these restrictions and enjoy the full season unrestricted.

All you need is a quality VPN that is made for the job!

Never heard of a VPN before?
Here's everything you need to know!

Disney+ Hotstar is no stranger to people trying to cheat their ways into the big leagues and access the best cricket streaming prices in the world.

This is why Hotstar has long since banned all the cheap and free VPNs from accessing the platform. 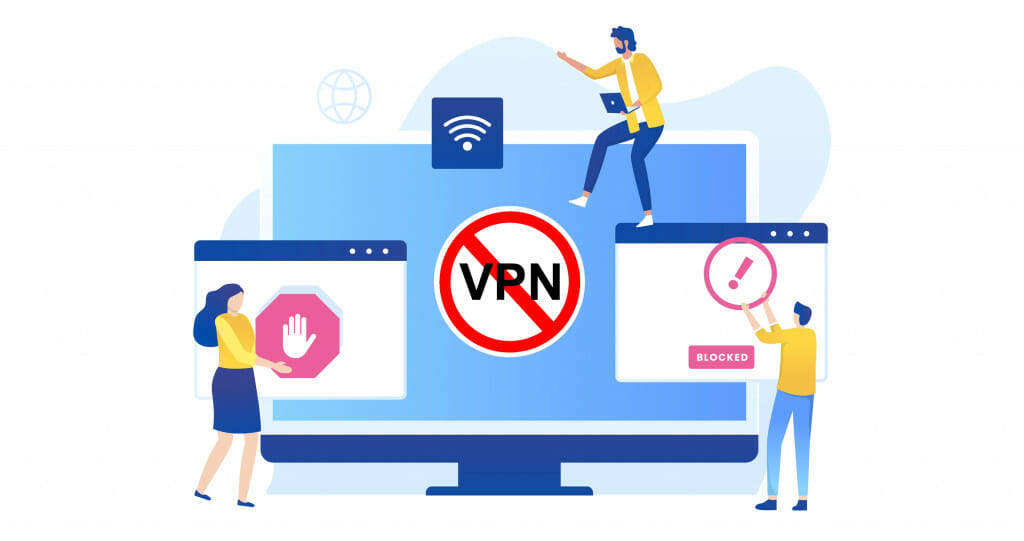 So what you need is a VPN that can seamlessly trick Hotstar into thinking that you are, in fact, in India and have the right to take advantage of your subscription and stream all the IPL you want!

In this case, a decent VPN should offer:

Check out what the best VPNs have to offer
And find the best one for you!
Our Top 10 VPNs!

What Is The Best VPN For Unblocking the Indian Premier League Streams?

We did our digging, research, and testing. And after going through multiple VPNs the world has to offer, we have determined without a shadow of a doubt, that the single best VPN for streaming the IPL is PureVPN.

Unlike most VPN providers that focus on server locations in the US, UK, and other western countries, PureVPN has a strong base in Asia as well, with a special focus on India.

They have more than 6,500 servers spanning 140 plus countries and over 180 locations. Forty of these servers are in India alone. 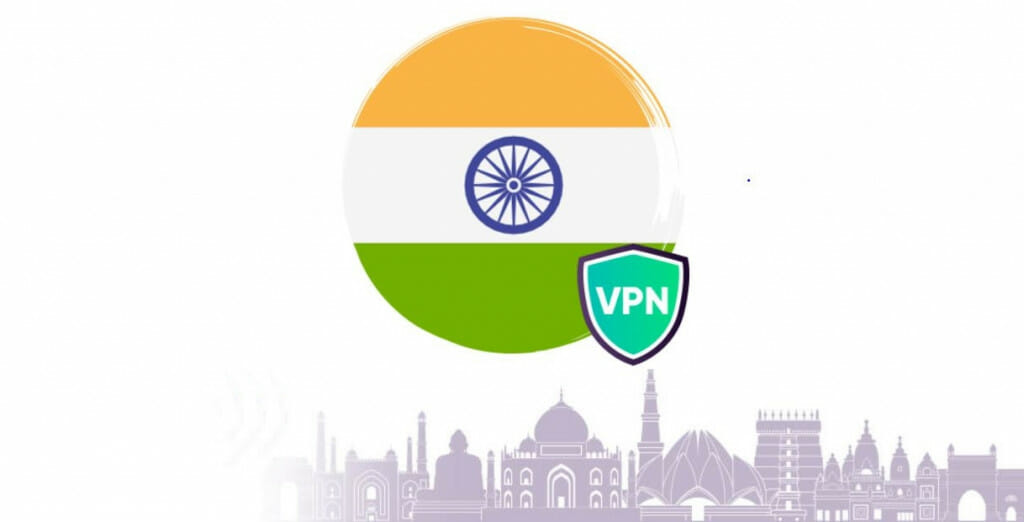 Some other key features include:

But How Can You Stream IPL On Hotstar Even If You Have A VPN?

There is a major hiccup when subscribing to Disney+ Hotstar India — payment can only be made via Indian Debit/Credit card and a few other local payment services.

A challenge that has no exact bypass for foreigners.

Both options will work.

The first is relatively straightforward. But if you don’t happen to have friends or relatives back in India, a quick search on Fiverr is bound to help you out!

Once an account has been made, on both PureVPN and Disney+ Hotstar, all that’s left to do is:

#1. Launch PureVPN and connect to an Indian server.
#2. Sing into the Hotstar app or access the platform directly on the website.
#3. Start streaming the IPL and enjoy the game!

Despite not being part of the crowd, watching cricket, or any sport for that matter can be quite an exciting and exhilarating experience.

And thanks to the Hotstar option and PureVPN‘s unrivaled compatibility, you can enjoy this season, along with your friends and family.