Netflix bans VPN users. Is that it?

For the past several weeks, users have been having trouble accessing Netflix with a VPN.

The problems everyone is facing might seem different, but the outcome is pretty much the same – Netflix seems to have blocked all VPNs and all VPN users from accessing the streaming platform.

So what does this mean? Is that it? Did Netflix finally win the war on VPNs?

What’s going on with Netflix and VPNs?

What do we know?

We’ve seen the situation constantly change this past week, as VPN providers were trying to crack the platform, while Netflix was busy trying to keep them out.

Here are some of the most common issues users are facing when trying to access the streaming platform when connected to a VPN: 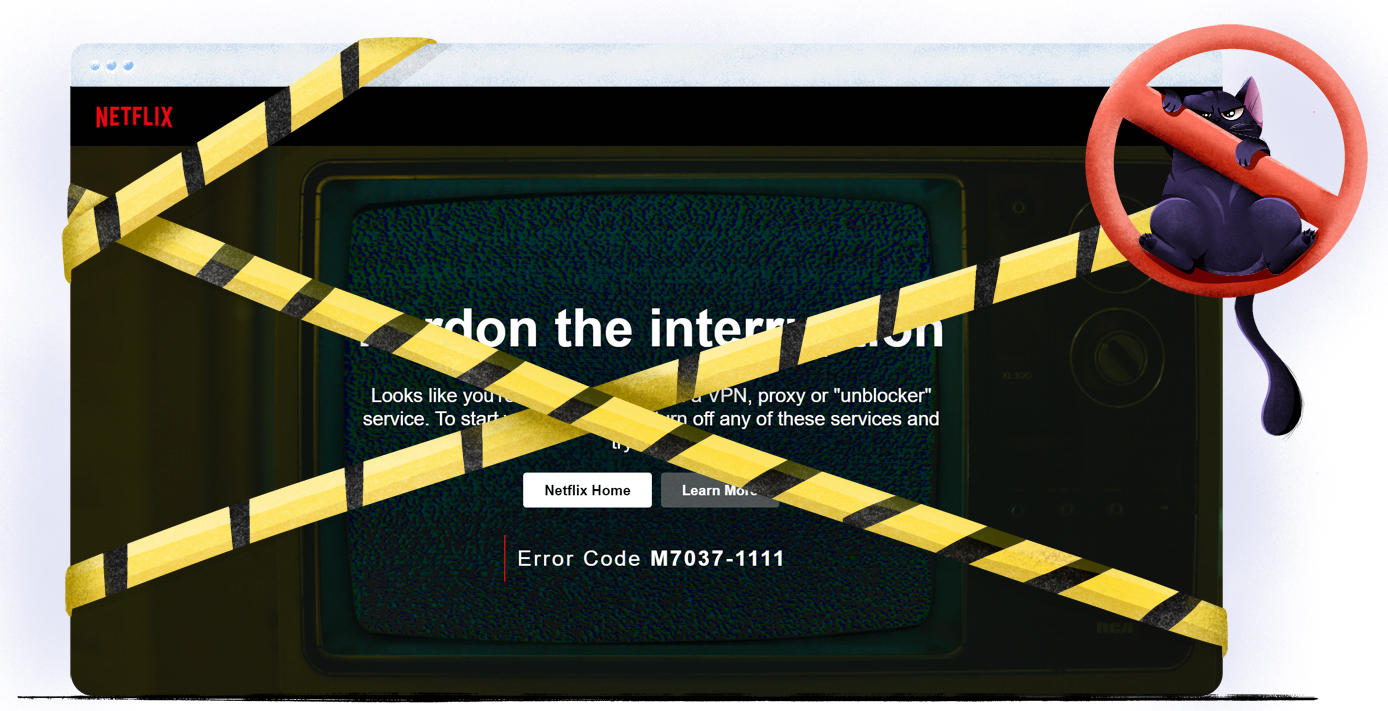 The issue seems to have hit every VPN provider that was known for being able to unblock Netflix and one of its many libraries. And users are already clamoring for refunds.

How is Netflix banning VPNs?

Full disclosure: we are not sure yet.

It seems to be regular IP blocking, the same way most streaming services operate to keep VPNs out, but if you look closer, it seems to be something a bit more complicated than that.

Netflix does seem to be blocking VPNs on the basis of blacklisting their known IP addresses. But if that was it, VPNs could have easily gotten a few new IPs and restored their access to the streaming platform’s catalogs. But that doesn’t seem to be the case.

We were able to unblock a particular Netflix library a few times when we used some of the bigger VPN providers. Unfortunately, the content would freeze in the middle of streaming, and lock us out of whichever Netflix library we were using.

None of the VPN service providers seem to know what’s going on at this moment, but we wouldn’t put it past Netflix taking its sweet time and building some new VPN detection and baning tool. It might be something sophisticated we have never seen before, or it might something very obvious we’re just not seeing. As of now – we don’t really know, and neither do the VPN providers.

All we can do right now is keep testing and try and come up with possible solutions.

Which VPNs were affected by the block?

As fast as we know, all or at least the vast majority of them.

NordVPN, CyberGhost, ExpressVPN, even our favorite provider for accessing Netflix – Surfshark are all struggling to either access Netflix or unblock any of its libraries.

So far, we’ve only had luck with unblocking Netflix using NordVPN. But that did take a lot of server switching and trying out different options and features. And even when we did get access to a catalog, it would block us out eventually.

For a while last week it seemed that there were at least four VPN providers that managed to find a workaround for the US Netflix library (those being NordVPN, Surfshak, and ExpressVPN), but they were once again blocked shortly after. This made us think that Netflix is not simply blocking IP addresses but probably dynamically identifying them somehow as well.

And the fun doesn’t even stop there.

Even some of the users that have never used a VPN seem to be having issues with accessing the platform. A bunch of Netflix subscribers has complained about being locked out of their local Netflix library. Netflix’s response to the issue was contacting the Internet Service Provider to find out why that particular IP was associated with a proxy or a VPN.

Is there a way to bypass this block?

Most of the relevant websites have already spammed the internet with the same old “Change server/Clear history” solutions. Even the providers themselves went a similar route.

These won’t work, because this time the issue is obviously different than
cache and cookies.

We did have some luck simply accessing the platform, to at least be able to stream some of the Netflix originals while being protected online. To do that you just have to keep trying to log in, until it eventually lets you through.

Keep in mind, though, most of the time you will only get the Netflix originals.

Other than that, VPN providers are still trying to crack the platform, and for now, it seems to be a losing battle.

What are the VPN providers saying?

We have reached out to most VPN providers regarding the Netflix ban to see what they have to say.

All of them are aware of the issue and are working hard to fix it.

Surfshark and NordVPN have assured us that the fix will be done in the coming week, and they are adamant their solutions will work. So far, though, we haven’t seen much progress.

However, none of the providers shared their findings on the ban, or how they are planning to fix it.

So is that it?

While things do seem bleak, we don’t think that’s the end of it.

Streaming platforms and VPN providers have been at this game ever since someone figured out that VPNs can be used to bypass geoblocks and local restrictions. So this is nothing new, nor is this the end of it.

If we had to make a call here and now, we’d say this can and mouse game is going to continue for ages.

We also have a few theories as to how you can possibly still access the various Netflix libraries. Since the platform did not reinvent its library and catalog system, there’s definitely a way to access them.

The providers simply need time to figure out what the block is and how they can bypass it.

At the same time, unblocking streaming services is what brought VPN services into the mainstream, making it a billion-dollar industry. So we doubt that the providers will roll over that easily.

So our advice is: Wait.

If you have a VPN subscription and you are very angry at it not working with your Netflix anymore, don’t rush to claim refunds that are long overdue. And don’t switch to some shady provider that swears it can unblock all of Netflix.

Hacking Netflix is no easy task. And if anyone can do this, it’s the bigger VPN providers, that actually have the firepower that rivals that of Netflix. If anything, this situation will separate the weak from the strong.

So hang tight. Try out some of the other streaming platforms, and we’ll keep searching for solutions as we always do.