VPN Glossary: Everything you need to know

Have you ever opened up an article on VPNs and immediately been struck by a whole armada of unknown words? Well, we’re here to all of that out once and for all.

This article will give you an overview and explanation of the most commonly used VPN terms. So next time you find yourself wondering what any of this is, you will have all the answers!

AES, or Advanced Encryption Standard, was developed in Belgium and chosen as the worldwide standard in 2001. It succeeded the previously inferior DES (Data Encryption Standard) and is now widely used by numerous governments for the purpose of Data Protection.

BitTorrent is a P2P (Peer-to-Peer) Protocol that enables file sharing between a group of computers. It chops data into small packets, sends them to the other computers, and reassembles these packets there. This is done in order to reduce the network load and thus, ensure a faster rate of data transfer as compared to sending one large file.

However, BitTorrent is mostly used to share illegal/pirated content and in case your IP is traced and you get caught, there are chances that you might face criminal charges. Using BitTorrent with a VPN that has P2P support is the right way to go.

The Domain Name Server, or DNS as its more commonly called, is the server that logs which IP-addresses belong to which domain name (URL).

A DNS leak happens when your IP-address gets leaked to third parties due to a computer error. This mostly happens in cases where a VPN provider doesn’t support a set of apps and so, while you’re starting up your VPN, these active apps leak your information by connecting to a web-domain with your original IP-address.

Another example of a DNS leak would be if your VPN connection suddenly drops but the connection to the web domain remains operative. However, this can easily be prevented by using the kill-switch feature available with most VPN services today.

Encryption is quite a general term for various techniques used to protect computer data. The information is coded with certain algorithms and can thus only be understood by devices that have the key to this algorithm. Encryption is a great technique since even if your encrypted data gets leaked, it would be meaningless to anyone who gets ahold of it.

The best encryption to-date is the AES-256-bit encryption. With this encryption, every bit of data you send will take  1.1 x 1077 combinations to decrypt.

A geo-block makes a certain type of content only available in a specific region. A great example of this would be how different shows and movies are available on Netflix in different parts of the world. A great way to bypass these geo-blocks is to change your IP to a region where the content you want to access is available and this is child’s play for any premium VPN service.

The Internet Key Exchange Version 2 is one of the latest protocols to exchange security keys between computer systems and it works in combination with IPSec to secure VPN connections. Its main purpose is to make sure no-one has access to the encryption keys needed to decode encrypted data. A huge advantage of IKEv2 is that the VPN connection doesn’t turn off if your connection switches from one network to another.

An Internet Service Provider (ISP) is basically the company or service which is providing you with access to the internet. Normally, the ISP provides the hardware needed for you to go online including routers, modems, and even TV set-top boxes along with any cable lines that might need to connect a client to a larger infrastructure.

The IP address is a unique ID given by their ISP to each device when accessing the internet. This is usually done through your internet router and the Internet Protocol address basically acts as a home address, identifying the place where the information is to be sent.

IPv4 and IPv6 are basically formats through which your IP addresses are defined. The IPv4 is a rather old version and has four series of a maximum of three numbers, which made the number of possible combinations limited in correspondence to the growing need of the world. The new IPv6 Protocol encounters this problem by introducing longer sequences of both numbers and letters.

In case your VPN connection drops, the kill switch is an automated security measure that will immediately terminate your connection to the internet altogether. In case your VPN service does not have a kill switch, your computer could be left open to attacks from outside which could easily result in a leaked IP address.

The Layer 2 Tunneling Protocol is used to connect devices to a VPN server; however, it only provides a connection and not security. Thus, encryption protocols such as IPsec need to be used alongside in order to get full protection.

IPsec is one of the most common encryption methods in use today by numerous VPN service providers. It is responsible for encrypting your data securely, checking on the completeness of data transfer, and making sure that encryption keys have also been transferred securely between your device and the VPN server. Even though everyone considers IPsec to be completely secure at the moment, the Snowden leaks suggested that the CIA was trying its best to crack this protocol.

These are records of activities taking place on any computer or server. Logs keep track of a number of things including the time someone logged in, the length of an internet session, the destination on the Internet, and much more. However, VPN providers normally have a no-logs policy so that in case they’re questioned by a government agency, they can simply escape any trap by saying they don’t have any such information.

But do remember to check the logs policy of your VPN provider, and whether the provider has ever given out information about their users or has been hacked which led to user credentials being leaked. Lots of VPN providers claim to have no logs, but not all of them do.

It is a device that connects digital equipment such as computers to the internet, usually through analog data lines (telephone cables). Today, however, most modems are a cross between a router and a modem.

If you want to set up VPN connections without using the VPN providers’ applications, OpenVPN is your go-to program. Since it is open-source and free. Everyone can have access to it and the best part is it uses its own encryption protocols (exchanging TLS encryption keys).

The Point to Point Tunnelling Protocol connects two computers while theoretically shutting out the rest of the internet. However, it’s rarely used today due to its serious security flaws.

A proxy server can be considered a lower-end version of a VPN. It does obscure your location while you’re online; however, proxy’s don’t offer the type of protection VPN services do.

A router is a device that distributes data packets from the internet to the right computer device by setting up a local network and boosting the internet signal when needed.

A central computer servicing all other computers connected to is known as a server; however, the type of service normally varies. For example, a VPN server would be connecting the computers to VPN networks whereas a video game server would allow different people on different computers to play with each other. In case a server breaks down, no one can access the data stored on it.

Smart DNS is quite a convenient alternative to using a VPN service. When using Smart DNS, the data being sent won’t be encrypted; however, your location will still be concealed and changed. So you still connect from your own IP address but while visiting a website, it’ll seem like you’re connecting from someplace else. This makes Smart DNS quite similar to a proxy server, with the exception that your IP address doesn’t get changed.

The smart part of the Smart DNS ensures that you only get another location when you’re visiting websites that require this. Thus, you won’t experience any delays when visiting websites that don’t have geo-blocks put into place. So it can prove to be quite convenient for circumventing geo-blocking, but it doesn’t offer you any anonymity. The biggest advantage of a Smart DNS, compared to a VPN, is that you won’t suffer from the delays that encryption causes making it ideal for streaming videos.

However, some of the very best VPN providers employ the use of both Virtual Private Network and Smart DNS, to let you both stay secure online and access streaming platforms.

If you’re an experienced programmer, Soft Ether is the perfect open-structure program that can be used to build your very own VPN.

The Secure Socket Layers (SSL) and the Transport Security Layer (TLS) are the most common methods of online data protection. TSL/SSL is responsible for the green checkmarks that appear in your browser window when visiting secure websites. They are basically used to protect any data that is being transmitted online.

The Onion Router, or TOR as it’s called more frequently, is a decentralized network developed specifically for anonymous and safe internet browsing. TOR uses nodes for data transmission and the data is encrypted again and again until it reaches its destination, which guarantees protection of the data and the sender’s IP address.

However, TOR is criticized quite a lot since the heavy encryption makes it undesirably slow. More importantly, due to the high level of anonymity it grants, TOR is very famous with criminals who can carry out illegal activities without getting traced. On the other hand, journalists and activists benefit from this advantage since TOR allows them to communicate while dodging censorship and repression.

A Virtual Private Network comprises of interlinked computers connected to the (public) internet. VPN servers act as a starting point to go online and they mask your true IP address with a made-up one that makes it appear as if you’re in a different location.  This makes your true location untraceable. Furthermore, VPN connections are encrypted which means even more protection for your data!

Companies also use VPN servers to give staff remote access to the company network and the sensitive information stored on it.

Streaming content that is only available in certain regions can also be accessed with the use of VPNs.

This is basically the VPN service you are using to connect to a VPN server.

The physical (or virtual) computer connecting you to the VPN service is a VPN server. It is responsible for granting you access to the service and securely carrying out data transmission. 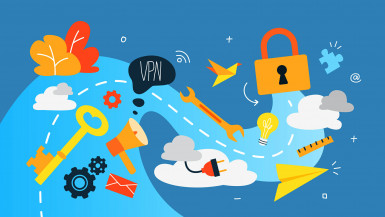