Is Netflix finally cracking down on VPN users?

For the past few days, users have been having trouble accessing Netflix with a VPN.

The issues everyone is facing may be different, but the outcome is pretty much the same – Netflix seems to have blocked all VPN users from accessing the platform.

So what does this mean? Is that it? Did Netflix finally win the war on VPNs?

So what do we know?

First of all, we have come across a number of ways Netflix is banning VPN users from the platform. 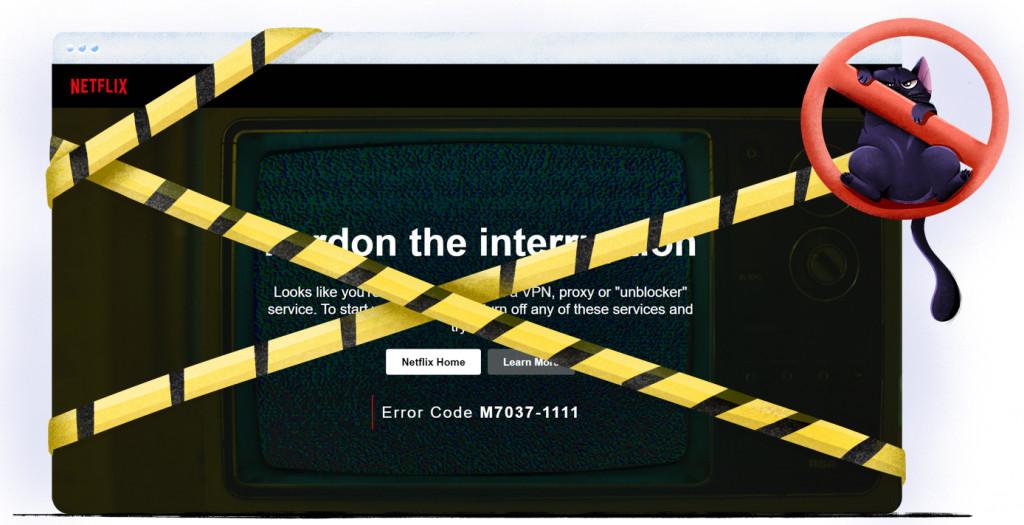 These are all definitely VPN-related errors.

Regardless, none of the VPNs we’ve tested and have trusted for years seem to be working as of now. And users are already clamoring for refunds.

How is Netflix doing that?

To be honest, we don’t know yet.

But we have theories.

If we had to choose right here and now, we’d say that Netflix has probably identified VPN IP addresses and started blocking them.

Which VPNs were affected by the block?

As fast as we know, all of the well-known, big providers.

NordVPN, CyberGhost, ExpressVPN, even our favorite provider for accessing Netflix – Surfshark are all struggling to either access Netflix or unblock any of its libraries.

So far, we’ve only had luck with unblocking Netflix using NordVPN. But that did take a lot of server switching and trying out different options and features.

The situation around the Netflix VPN block started changing on the 9th of August.

The first ones to bypass the block were NordVPN and 5 Euro VPN, soon followed by Surfshark. It seems that other VPN providers are still dealing with the issue.

So far, we have only been lucky with accessing the US Netflix library. However, the providers have assured us that they are continuing to work hard on resolving the issue and soon all of the other Netflix libraries will also become available.

Is there a way to bypass this block?

Most of the relevant websites have already spammed the internet with the same old “Change server/Clear history” solutions.

These won’t work, because this time the issue is obviously different than cache and cookies.

But we did have some luck accessing the platform, to at least have the luxury of streaming while being protected online.

If Netflix is saying your login information is wrong, just keep trying to sign in until the platform lets you through. This usually takes just two tries.

If you’re looking to unblock any other Netflix library… well, there’s no fix for that yet. At least, we haven’t found one… yet.

But we’ll keep testing, digging, and will definitely share our findings.

What are the VPN providers saying?

We have reached out to most VPN providers regarding the Netflix ban to see what they have to say.

All of them are aware of the issue and are working hard to fix it.

Surfshark and NordVPN have assured us that the fix will be done in the coming week, and they are adamant their solutions will work.

However, none of them specified what caused the ban, how does it work, and what are their plans on overcoming it.

So is that it?

Streaming services and VPNs have been at this game ever since someone figured out that you can milk Netflix for all it’s worth with the right server and DNS setup.

So if we were to make a bet, we’d say this cat and mouse game will be ongoing.

Need to know more?
Here's everything you need on Netflix and VPNs
Read our guide!

Netflix did not reinvent its library system, and that means that there’s still a way to access it.

On the other hand, ‘hacking’ streaming services was what brought VPN services into the mainstream, and we doubt providers will back down without putting up a decent fight.

No need to slam doors on VPN providers, demand refunds three months late, and try switching to some BestNetflixVPNTotesWillUnban that will no doubt appear overnight.

Give the providers a bit of time and they will definitely come up with something. If anyone can, it’ll definitely be the big and trusted VPNs with a lot of development firepower.

Trust us on this – no makeshift VPN provider with a name they so obviously think is smart will be able to crack the behemoths that are streaming services such as Netflix. They might get lucky with an IP, but that won’t last.

What we need are solutions that are here to stay, and there’s but a handful of VPNs that can provide them.

Thanks for the information on the VPN. There are so many of them, that we are having trouble keeping track sometimes and testing all of them.

First of all, both NordVPN and ExpressVPN have somewhat restored their access to other Netflix libraries, specifically the US one.

As for Wachee, we are aware of that provider.
Actually, Wachee is experiencing the same issues when accessing Netflix libraries, it just has a bit more luck from time to time.
On the other hand, Wachee is extremely slow, it’s requested access to Chrome’s data makes our skin crawl, and let’s not forget – VPNs are about privacy and security online, getting access to streaming services is a very much welcome added bonus, but that should definitely not be at the cost of your safety.