We’re all well-aware that big tech giants and social media platforms know a thing or two about us. After all, how can one explain the targeted ads showing in our feed?

Today, more than ever, people appreciate online privacy and security. Several publications raised awareness of the issue, such as Netflix’s 2020 release, The Social Dilemma.

Other market participants decided to take things a bit further, to show us, ordinary people, to which extent these corporations follow our online activity.

Take, for instance, Signal with their blog post “The Instagram ads Facebook won’t show you.” If you haven’t seen it yet, let us explain what exactly happened.

What did Signal do?

According to Signal’s site,

“The Signal Foundation’s mission is to develop open-source privacy technology that protects free expression and enables secure global communication. As more and more of our lives happen online, data protection and privacy are critical”.

And that’s precisely why they chose to take action!

The team of Signal decided to use Facebook’s tools against them. They created an ad campaign highlighting all detailed and personal information that this platform knows about the user and uses it to display targeted ads.

By this point, most people know that Facebook knows a thing or two about them. But very few actually understand how deep the rabbit hole goes.

And that’s what Signal decided to showcase.

How did they plan to do this?

Their original concept was to use paid Instagram (which belongs to Facebook) ads, specifically designed and targeted to end-users.

The end goal was to demonstrate how grossly invasive these platforms can be.

At this point, you might be wondering, is it possible for these platforms to know me to this extent?

How does it all work?

But there’s a catch!

Basically, the ads CAN’T SAY how they are targeting you. But that doesn’t stop them from using all the possible information the social media platform has to “personalize” your experience.

Not on Facebook’s watch!

Signal designed a multi-variant targeted ad to show Instagram users the amount of personal data the platform collects and sells to third parties. But they never got to launch the campaign.

According to Signal, Facebook disabled their account and banned all of the ads as soon as they tried to launch them. 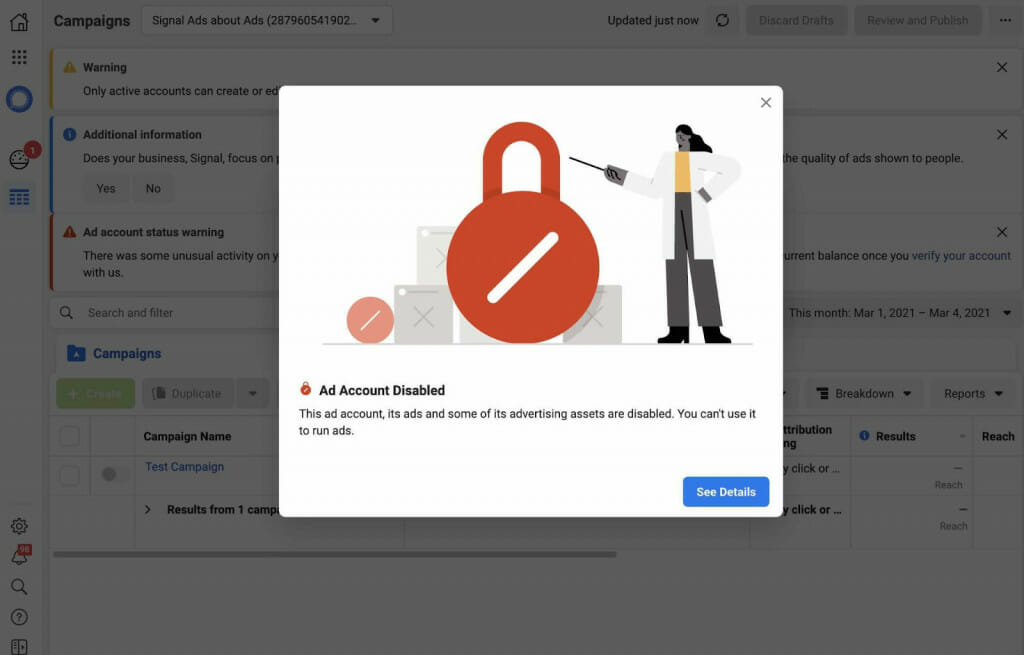 “The ad would simply display some of the information collected about the viewer which the advertising platform uses. Facebook was not into that idea”.

He said, she said

Such strong of a claim is very unlikely to go without a response. And we were here to witness it!

“This is a stunt by Signal, who never even tried to actually run these ads, and we didn’t shut down their ad account for trying to do so.”

He further explained that if Signal launched such a campaign, the platform itself would reject some of the content because of its advertising policy mentioned before.

“But of course, running the ads was never their goal — it was about getting publicity.”

Signal, however, denies these claims in an angry Twitter war:

We absolutely did try to run these. The ads were rejected, and Facebook disabled our ad account. These are real screenshots, as Facebook should know. pic.twitter.com/6ZKiA6nr2e

A few days have passed since the incident and the Internet has probably moved on to the next being thing.

It hasn’t become any clearer whether it was Facebook or Signal that was telling the truth.

But, in all honesty, that doesn’t matter to us, and nor should it to you.

The takeaway here shouldn’t be two corporations hashing it out on social media. It’s a reminder that as long as you are on social media, all of your information is out in the open, and none of the things you do or share online will ever be private.

So the question is: Are you OK with that?