How to watch the Euro 2020 Championship for free?

The UEFA European Football Championship (Euro 2020 Championship) is finally here. It was initially scheduled to happen last year but was postponed because of the COVID-19 pandemic. The historic competition will run until July 11, and despite happening a year later, it is still the UEFA Euro 2020 (which is not confusing at all).

It comes five years after Portugal’s astonishing win against France and, lest we forget, the England humiliation in the same tournament. Several European nations will go up against each other to determine the ultimate continent’s soccer champion.

Like many past editions, the tournament promises to be riveting and full of both magical as well as shocking moments.  You might as well prepare to be on the edge of your seat when the whistle blows and the ball starts rolling.

Wait until you hear what’s in store for this season that’s a year overdue!

Enjoy free Euro 2020 Championship livestreams wherever you are!

In 2016, the tournament adopted a new format that increased the number of participating nations from 16 to 24. This year’s edition will stick to the same format, with the teams being divided into six groups, each with four teams.

Only the top two automatically qualify to the next round (Round of 16) at the end of the group fixtures. The best four of the six teams that finish third in each group will also qualify for the knockout stage, where the loser of each fixture exits. 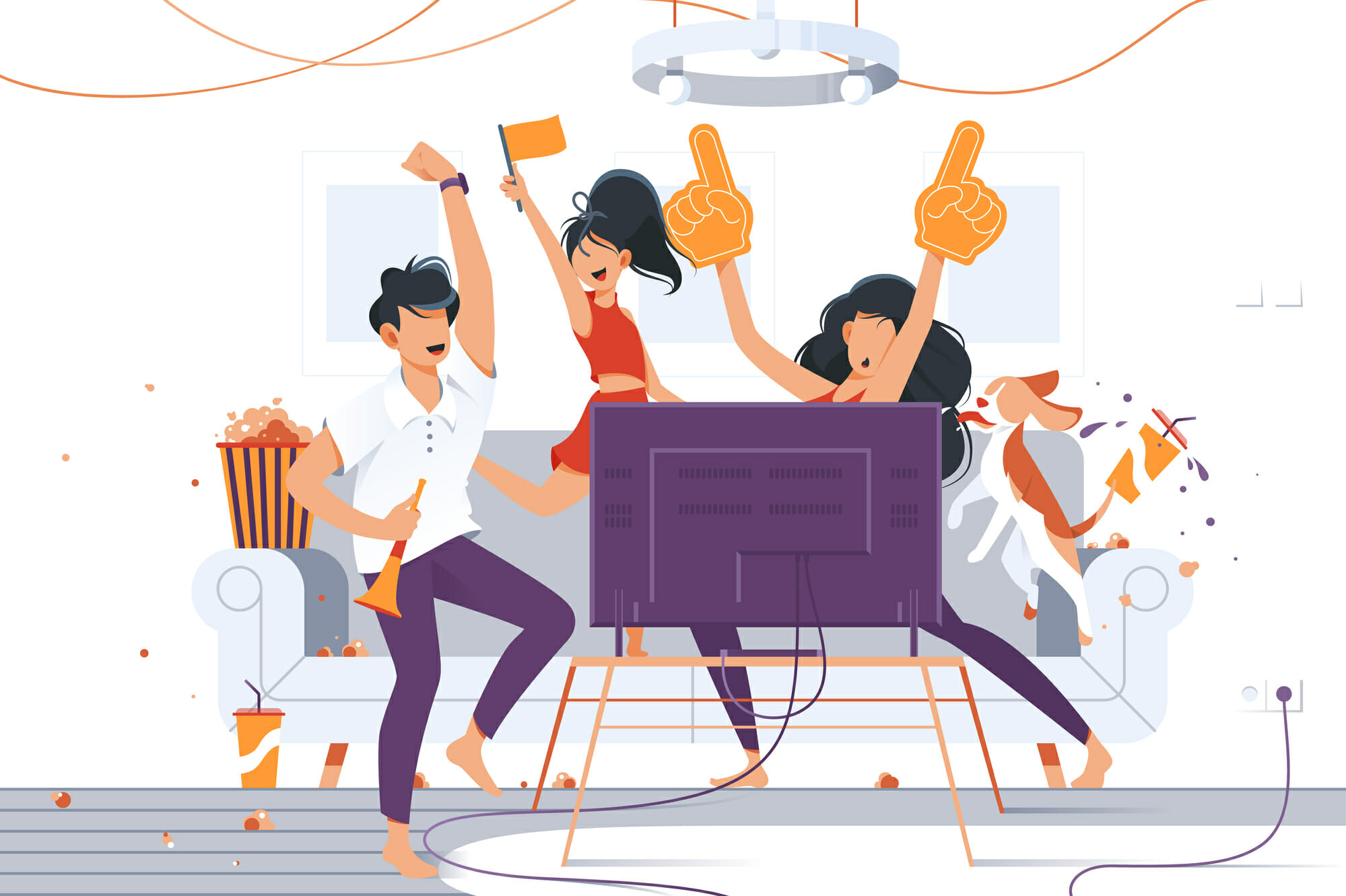 The winning eight teams will play in the Quarter Final, followed by the Semis and the Final on the last day. All eyes are on Group F, the Group of Death, which has three heavyweights: France, Germany, and Portugal. It is worth noting that the controversial VAR technology will be in use for the first time in the competition.

The Euro Championship has traditionally been hosted in one nation. The current edition will, however, be hosted in 11 different countries as a gesture to mark the 60th edition of the tournament. Each country will provide a single city venue, and a small group of fans will be allowed to attend the games in-person.

Who will be broadcasting the Euro 2020 Championship this time?

UEFA has ensured the games are being televised all around the world, so you can be assured there is a way to watch the games regardless of your location.

But as you would come to expect, sports streaming is always a mess and never as easy as just tuning in. The rights keep shifting every year and, and depending on where you are, you might not be able to enjoy the games for free.

In the US the Euro 2020 broadcasting rights belong to DirecTV, so you can catch the games live on the Disney-owned ESPN+. 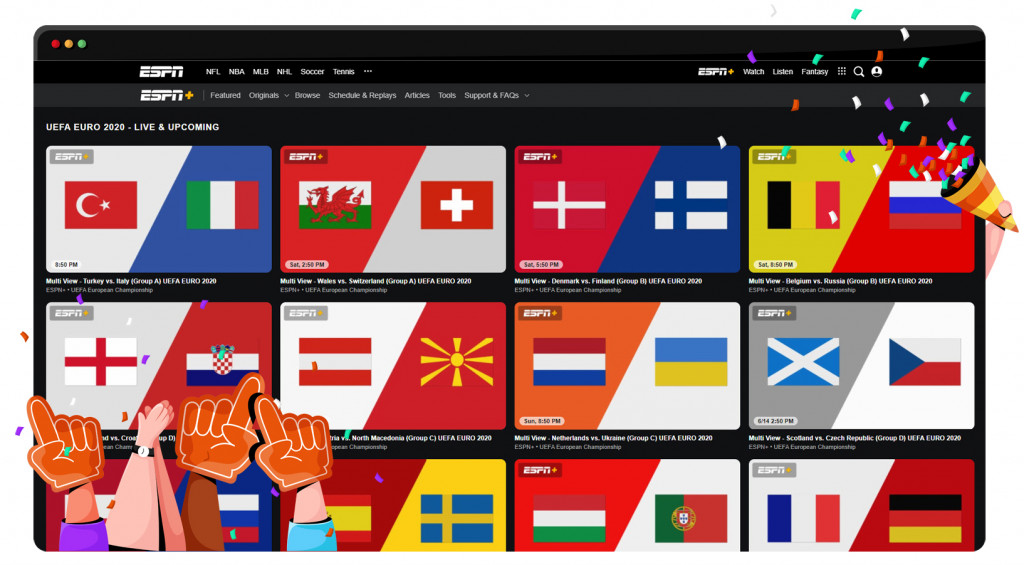 However, for this option, you require a subscription and that is entirely another thing. You’d probably not want to take out a full cable subscription just to be ridiculed by friends, mocking how Europeans call the beautiful game of soccer ‘football’.

But no worries with that one; you can still enjoy all of the games completely free and save up for that retro jersey you’ve been eyeing.

There might not be a free UEFA Euro 2020 live stream in your region, but there are alternative options in Europe among the participating nations. The Euro matches will be aired on some platforms offering free coverage, and that’s your ticket.

Here are a few of them:

UK: ITV and BBC One

Football fans in the UK are among the most favored as the games will be available for free on the national broadcasters BBC and ITV – equally split.

Interested?
Check out our full guide on how to get BBC iPlayer anywhere in the world!
Get streaming!

They can also be watched from the respective apps and official sites. These free British broadcasts have got your back if it’s the posh accents you are looking for.

And the best part is, all you need to get access to the platforms is a British postcode, and… we’ll get to that part. 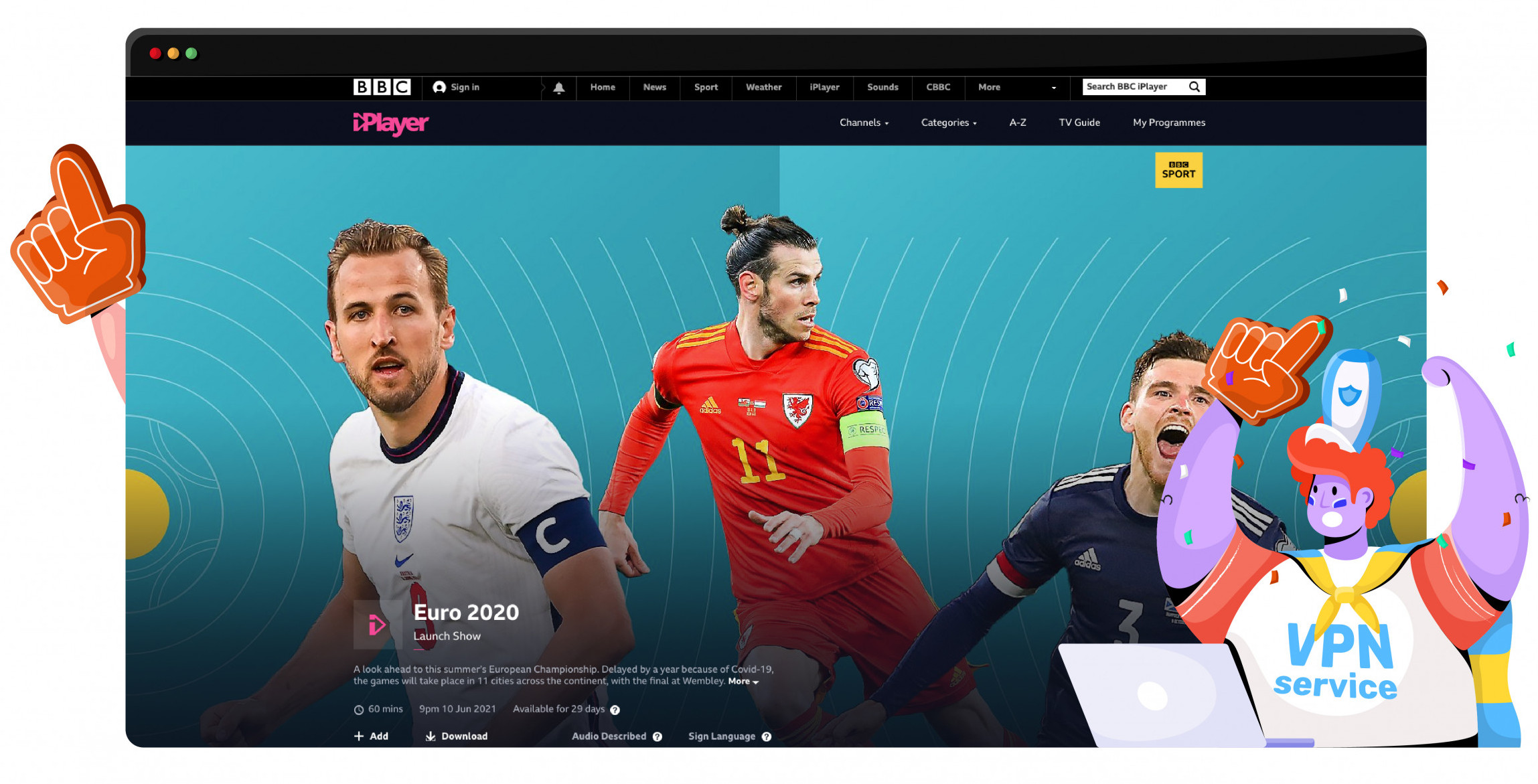 If you want to go even posher (is that a word?), then TF1 and M6 – the French streaming platforms are worth checking out. Almost half of the competition’s matches will be free-to-watch on the platforms, and all you need is to register an account before the game gets underway.

You can also make good use of the time in between the fixtures by tuning into M6’s dedicated channel on 6play that’ll be showing classic matches from past Euro editions. 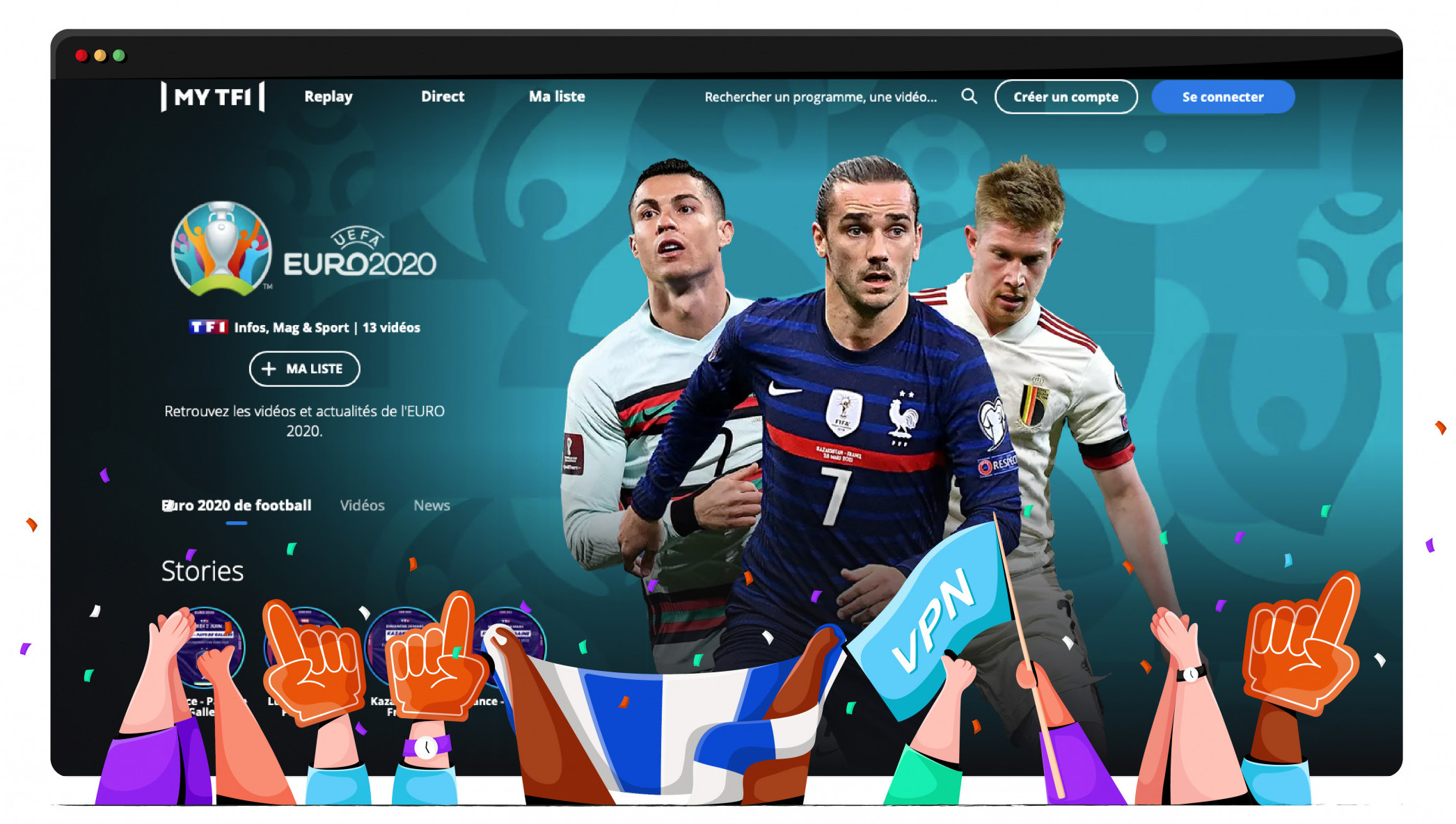 Besides art and historical sites, Italy is also big on il Calcio. The Azzurri (Italy’s national team) appear to have bounced back from the shock defeat to Sweden that made them miss out on the 2018 World Cup. They are contenders, and as you’d expect, some of the channels in Italy will be showing their games for free.

Italy’s RaiPlay will be home to 27 matches that you can watch at no cost after creating an account. Remember to order some Neapolitan pizza or make pasta using that recipe you came across on the internet to complement the Italian experience. 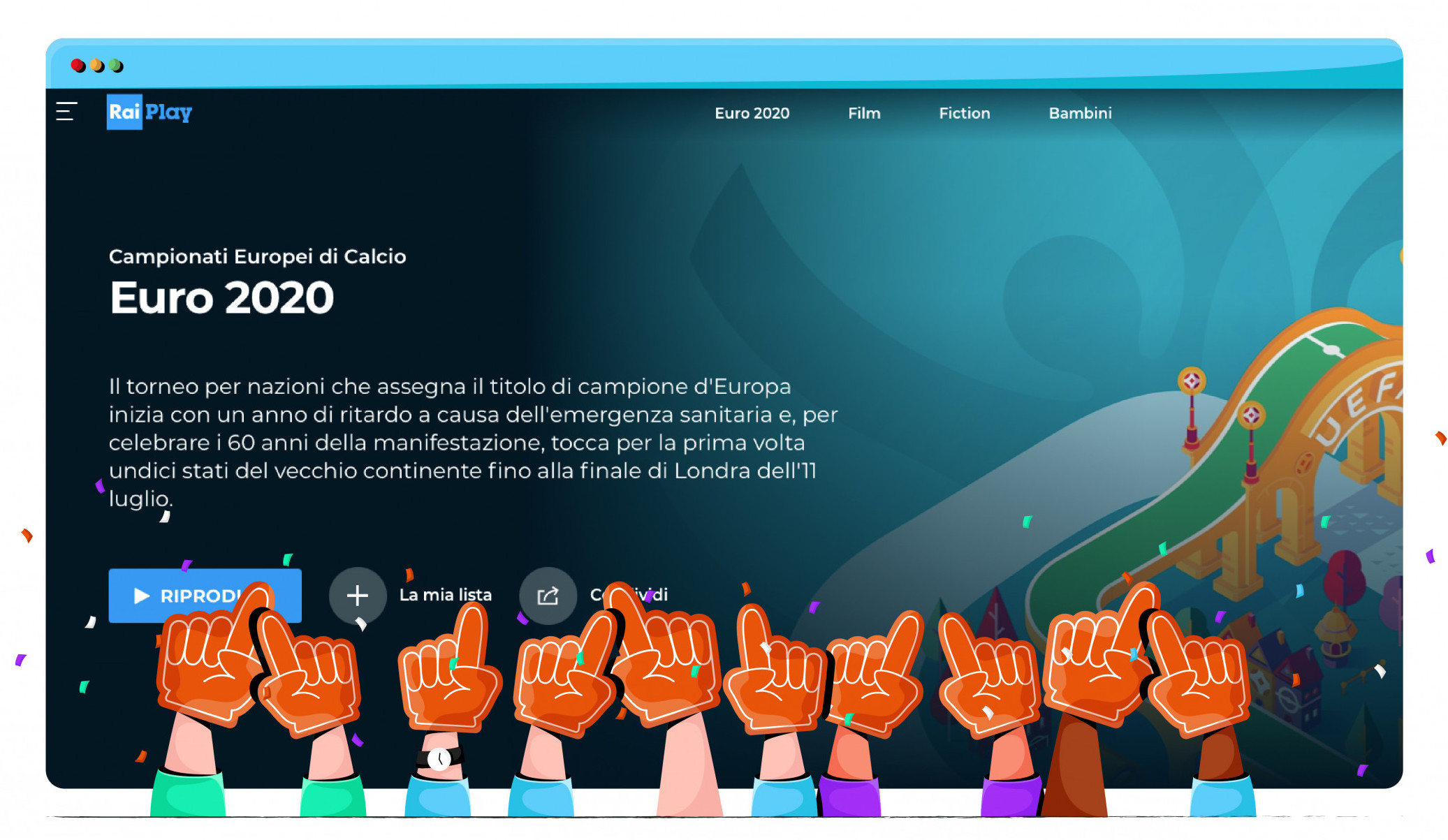 Cristiano Ronaldo’s Portugal side will undoubtedly be one to follow, considering its immense firepower upfront. You can watch the European championship matches, including those involving A Seleção, on SIC, RT, or TVI.  The only challenging part is finding out which of the three platforms will be showing the games you want.

Germany has two platforms that will be streaming the majority of the Euro 2020 matches. So if you’re into some rough commentary – you can use either ZDF or ARD. Neither option has a registration or subscription requirement. 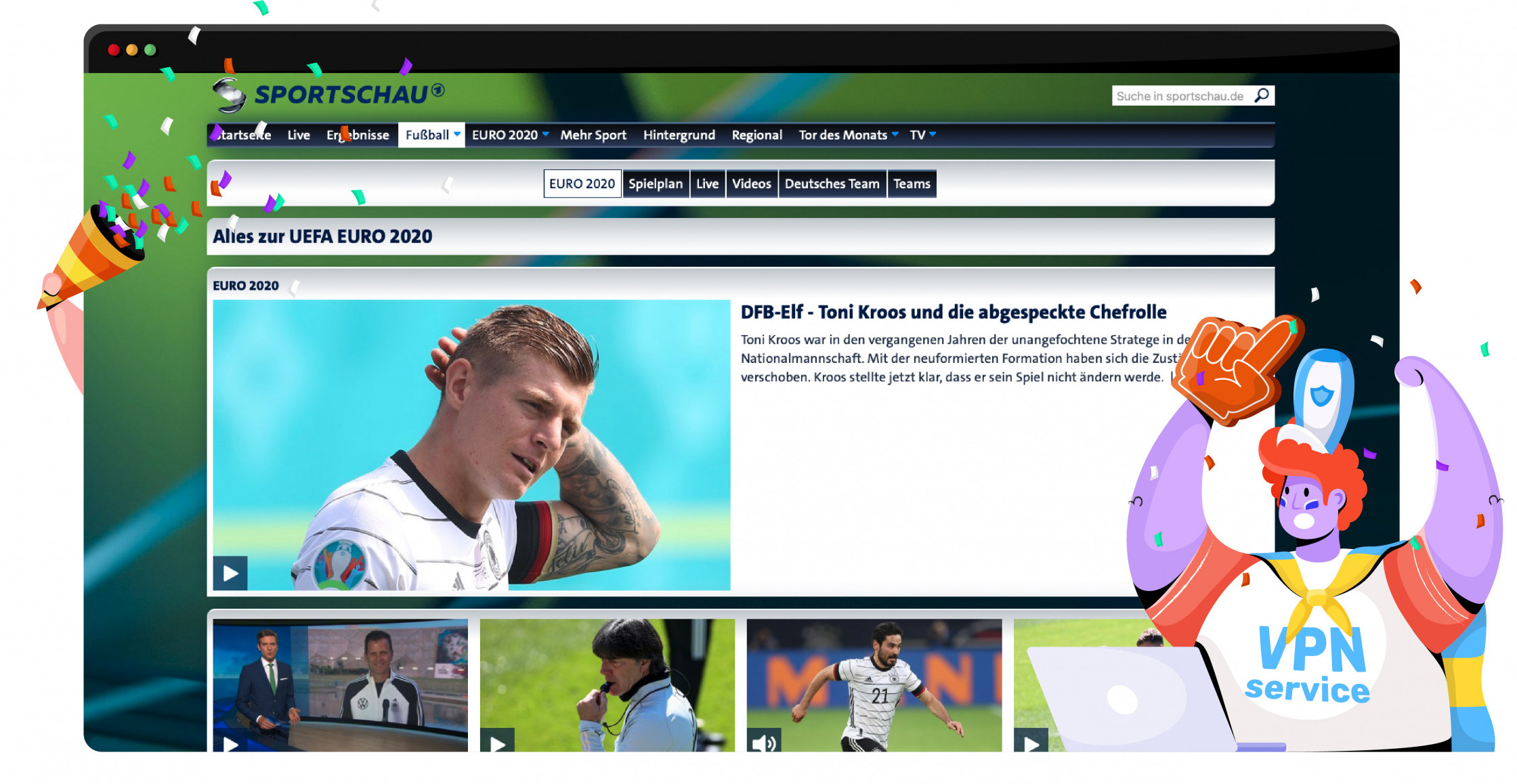 Poland will once again be relying on the main man up top Robert Lewandowski (overdependence, maybe?), to fire them past the group stage. Its fixtures aren’t a walk in the park, considering their defense has been, well, less than average. Enough of the analysis. If you’re one for the Polish commentary, you can head over to TVP sport that will be broadcasting the games for free.

Honestly, we can keep going. Pretty much every European country will be broadcasting the Euro 2020 Championship for free in some capacity. Whether it’s just a few matches or the whole game – it’s Europeans, for once, who will be enjoying some free content.

The majority of the platforms above will mostly show fixtures involving their national teams and a few others in some cases. If, say, Azzurri is playing, the best way to watch the game is through any of Italy’s free platforms.

But it’s never as simple as somehow finding Italian channels on your TV.

All of these platforms are geo-restricted and will be airing the games only for locals. This is to say; you have to pass as a local to watch them.

Now, that doesn’t mean readying your passport and applying for citizenship.

What you need is a decent VPN with streaming unblocking capabilities and many servers in the participating nations.

What?! Never heard of a VPN before?
Here's everything you need to know!

You didn’t think we would only show you half the workaround and let you figure out the rest?

No, that’s not how we roll.

The best VPN for the job is NordVPN, and here are some of the reason it is our pick:

Get the world’s most famous VPN today!

Grab the best deal for NordVPN

Be the 12th man from your seat

You may not be able to cheer your team on the field, but you can definitely get the pleasure of watching it play.

Grab NordVPN and enjoy UEFA Euro 2020 wherever you are.