Trust.Zone
★★★★★
★★★★★
3.5
Price
$2.33 p/m
Overview
Trust.Zone in a short time built a name for itself in the world of VPN services. The company offers a highly reliable service for a relatively low price, and keeps things simple without sacrificing important functions.
Support
Visit Trust.Zone

Trust.Zone, being relatively new to the VPN market, has made an impression by establishing a fine network of servers in a short period of time.

The company was founded as recently as 2014 but already operates a fleet of 200 VPN-servers in almost a hundred countries. All of the popular locations for VPN use are present in the provider’s list. But Trust.Zone adds some unique locations to the mix that other VPN providers often lack, such as China, Indonesia, and South Africa. South America is poorly served with a single (!) server in Brazil, but in Europe you can always find a server close to where you want to be (virtually).

Speeds are good, although they never quite reach the levels of top tier VPN services. One possible explanation (we’re not sure) could be the fact Trust.Zone doesn’t own every server in their fleet. Instead, it uses cloud services to expand its reach.

On the plus side, the network allows BitTorrent on every available server and has a free service for users who are fine with a data limit of 1GB per month. Which is an excellent deal for people who are looking for a trial run. 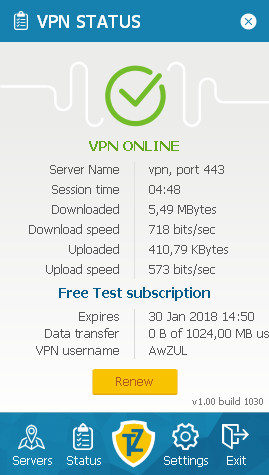 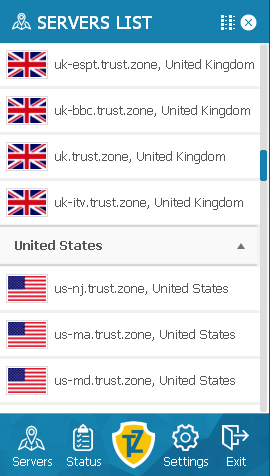 Watching American Netflix from the comfort of your European home, or BBC iPlayer from your American couch may soon be a thing of the past, considering the efforts of most streaming giants to suppress the use of VPN.

With Trust.Zone everything’s coming up roses for the moment. Their dedicated US Netflix servers are fast and reliable enough to give you access to any content you want.

With other locations, it may be a bit tougher. German Netflix doesn’t have its own server, for instance, being less popular than its American counterpart.

Trust.Zone’s Windows app looks a bit outdated but all of the features are as advertised. It allows you to swiftly select the server you want, and also features an automated start mode. It also has a kill switch for when your secure connection fails. The app has the option to select your preferred ports on VPN-servers, and improve protection from DNS-leaks. If that isn’t enough for you, and you need more functions, we advise you to look at OpenVPN or SoftEther, which have an even wider range of specific setups.

One of the peculiarities of Trust.Zone is their app is Windows only. Connections on other platforms (iOS, Android) will have to be run through an OpenVPN setup. Small beer for regular VPN-users, but starters can feel intimidated by the many available options. Tutorials and support sites are widely available, but still.

Android users have one extra option: to use Trust.Zone via built-in VPN support of L2TP/IPsec.

iOS and macOS users probably like to use OpenVPN or other VPN-applications that allow connecting to VPN manually. 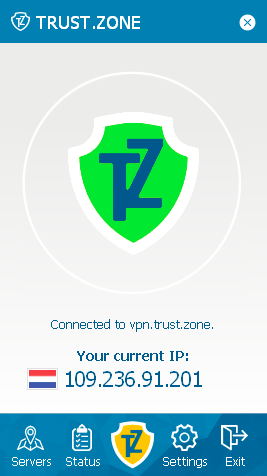 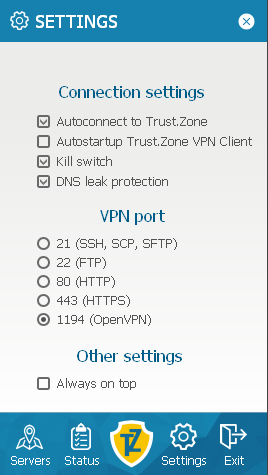 Speeds in European territories are very high when using Trust.Zone. But connecting to the USA or some of the more exotic locations slows speeds down, sometimes considerably. Speed loss when you connect to an American server from the European continent is minimal. Ensuring smooth streaming of US Netflix. Trust.Zone also allows for Torrent downloading. Not at speeds you clock when downloading without VPN, but you’ll find the speeds are more than acceptable.

Trust.Zone is one of the few providers to offer a free VPN service. There are limits to this service, of course, but it’s good to see a reliable, free VPN service out there that doesn’t disappoint. The deal is three days of anonymous surfing through VPN (on one of 108 out of 128 available servers), with a data limit of 1GB, and a hardware limit of one device per user.

This really is value-for-money, especially for people new to VPN. Trust.Zone’s free three-day trial is the best way to start using VPN. And Trust.Zone’s monthly rates are amongst the least expensive among the premium VPN services:

Trust.Zone employs the use of most relevant and reliable security protocols, that can guarantee your privacy. The only thing missing in the mix is the latest encryption protocol – IKEv2. But we won’t hold this against them, seeing how recent this protocol is.

The fact the company is based in Seychelles means extra protection. Trust.Zone sits far out of reach of those governments and media companies hungry for your data.

Trust.Zone has a zero-logs policy, but it does collect some data about you, such as the email address you use for your subscription. Its website uses cookies and Google Analytics, but this is standard practice for VPN services and is nothing to worry about.

The Kill Switch and DNS-leak prevention features will definitely give you peace of mind when browsing the web.

Users on the lookout for VPN providers that are good at circumventing geoblocks should definitely consider Trust.Zone. The provider has dedicated servers maintained specifically for the purpose of streaming the US library of Netflix. This service works as advertised and has successfully evaded any new IP-blocking efforts by Netflix until now.

Streaming speeds of this specific server may vary due to fluctuations in visitor numbers. But binging US series is mostly a smooth and enjoyable experience.

A big difference that sets Trust.Zone apart from most modern providers is that it allows the use of Bittorent on each of its servers, to help you with your anonymous downloads.

The service however doesn’t support IPv6 at this moment, so make sure to kill this function on your router if you want to download Torrents. This prevents you from being detected by officials. Also make sure your killswitch is engaged, which blocks your Internet traffic any moment your VPN connection fails.

Customer support is somewhat meager, compared to other services, but is still OK.

There’s no live chat option, most questions will be answered through online forms and emails. But only on regular office hours in Seychelles (so you should first look up SCT zone).

There’s also a sizable FAQ list online with a bunch of solid instructions on how to set up and maintain your VPN subscription.

Still, our verdict would have been more positive had we found things like live chat, social media help, or Skype options.

Trust.Zone has built a name Premium VPN name for itself in record time. However, it seems that the provider has stopped there and is not currently expanding its services, server park, features, or even customer support. Such a shame, given what Trust.Zone could have been.

Nonetheless, the provider offers a highly reliable service for a relatively low price, and keeps things simple without sacrificing important functions. Even with a relatively small server park, the connections are still good, lag is rare, and security protocols meet all of the current standards.

Customer support may not be around 24/7, but the support staff is helpful and knows its stuff, which is everything you’d hope for.

The location of the company is a huge plus, seeing how the Seychelles government has no laws on data storage as of yet.

All of this helps paint a quite positive and unique picture. And the three-day free trial is the cherry on top!

With Trust.Zone’s pricing and overall quality, it’s practically impossible to be disappointed by the service.