Geoblocking: What is it, how does it affect you, and how can you fight it?

The days ‘everything’ on the internet was freely available, are over. The internet has turned from being a symbol of freedom to being as restrictive, and as invasive as everything else in life. These days, nearly every website uses some form of geoblocking. From your favorite pizza place to each and every one of the streaming platforms you are paying real money for. You might not know it, but it’s there.

Let’s start with the definitions.

Geoblocking is a special kind of technology that restricts access to certain parts or certain content on the Internet based on the user’s location identified by the means of their IP address and other data.

Geoblocking has its reasons. For example, movie or TV show productions are very expensive. Just as the rights and licenses you need to air a movie in certain regions are. So if a movie you have been looking forward to isn’t streaming in your country, chances are it has something to do with money. Whether the rights were too expensive, or their owner was not willing to sell them in your country – there are multiple reasons for you to be cheated out of your content.

This doesn’t just apply to movies, shows, or sporting events, this applies to entire streaming services and the content their feature.

But how does geoblocking work? And are you OK with that?

Don’t be a victim to online restrictions!

Grab the best NordVPN deal ever!

The basics of geoblocking

To truly know what geoblocking is, how it affects you, and how you can bypass it, you first have to learn how geoblocking works.

Every time you connect to the Internet, you as assigned an IP address. Think of it as your passport in the digital world. And much like a real passport, it has a lot of different information about you, including your geographical details. And these details can get absurdly specific, identifying you down to the city, even the street where you might be.

This information that is immediately accessible to anyone is the reason geoblocking is possible in the first place. Without this unique geographical stamp, you’d just be another device on the internet. With it, you are assigned a specific location, and a whole bunch of other information to do with that.

How geoblocking affects you

The sheer availability of this information already seems like a breach of privacy, doesn’t it? And it’s definitely accessed and used to display ads, for example, and build your online profile.

But it can also become a true nuisance!

Raise your hand if this ever happened to you: you are desperately trying to watch a TV series, or movie, or sports stream. But, low and behold, you just can’t find it anywhere. But the lucky people in your neighboring country can enjoy the same thing on the very same streaming platform. This is geoblocking in practice.

In concept, it’s simple. All you have to do is change your IP address to one from the country whose content you want to access, and that’s it. But this isn’t as easy as flipping a switch, and you need the help of specialized, sophisticated technology to make that happen.

Tired of geoblocking? Get NordVPN!

The European Countries might have it better than most.

On April 1st, 2018, new EU legislation on geo-blocking and streaming content went into effect. There are no more blocks on content within the European Union. This means that streaming services can no longer block the content you’ve paid for or registered for if you try and access it from another country in the EU.

But it’s not all borderless streaming. The new legislation comes with its own restrictions.

First and most obvious, this only applies to countries within the European Union. As soon as you move past its borders. And that’s no fun.

Netflix is one of the most unique examples of geoblocking.

Most streaming platforms can tend to have a pretty uniform catalog of movies, shows, and exclusives. Or they simply might not be available in your country. But Netflix is different.

As you probably know by now, Netflix has different content libraries for every country. Depending on where you are, where you move to, and what you want to watch, you might be having a very different Netflix experience than the people on the other side of the planet.

Want to know more about how Netflix works?
Check out our complete guide!
How Netflix libraries work

Most streaming platforms launching post-Netflix went a different route when setting up their libraries and accounts. But HBO Max decided to follow the example of Netflix.

HBO Max was the hottest streaming platform for a while, with some of the most exclusive and unique approaches to its content. But the platform went global only recently in early 2022.

So imagine our surprise when we found out that HBO Max has the same local library setup as Netflix. And with the platform still in its early days, the US library of the streaming giant offers over 60% more content than in its new locals. All you need to tap into that are the right tools. 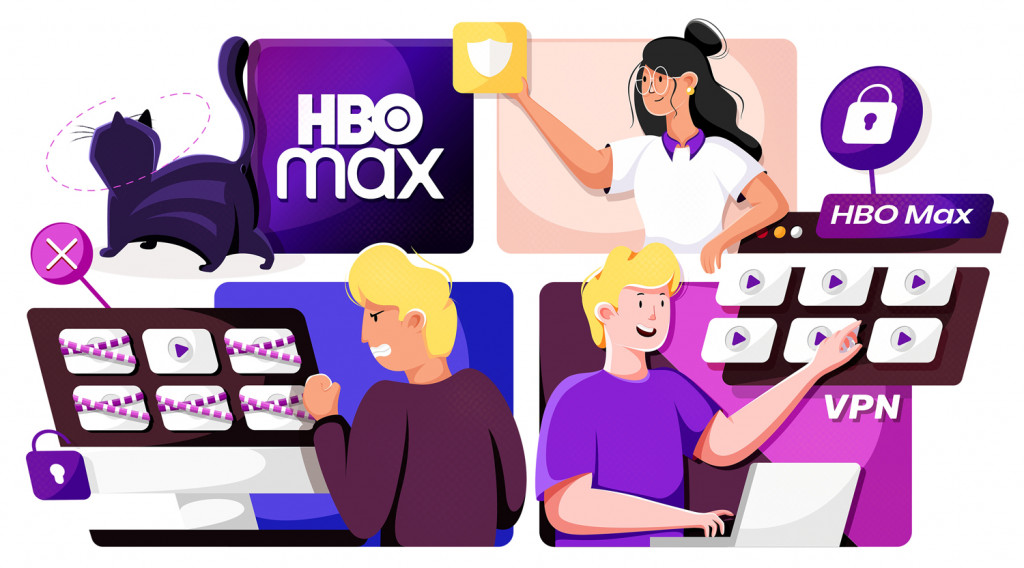 Ever since geoblocking became a thing, people started finding ways to bypass it and take advantage of things not available to them.

The first step toward a level streaming field was proxies. But as they were proving to be less useful and less versatile, VPN technology has proven to be the perfect tool to bypass pretty much everything geoblocking throws at you.

Still don't know what a VPN is?
Time to catch you up!
What is a VPN?

However, streaming providers are no pushovers either.

As soon as VPN use has become mainstream, streaming services went to great lengths to develop blocks and restrictions that would keep VPN users out. The more sophisticated the VPNs got, the tougher the blocks became. And it all resulted in the massive VPN ban by Netflix in 2021.

But that’s not to say that the heyday of VPNs is over. This struggle merely helped weed out the weak from the strong.

Today, the battle is centered around VPN accounts: content providers block any (fake) IP associated with VPN servers, after which VPN server parties quickly set up a swath of new IP addresses. And so on: it’s a cat-and-mouse game that is likely to last a very long time.

Technology is getting more sophisticated by the day. That’s a given. And to make sure that you stay ahead of the blocking and censoring game, you need to go with the right VPN provider.

And at this point, every country, every streaming service, every online block requires a specific solution.

So if you don’t want to put up with these online restrictions anymore, you have to go with a VPN provider that will not let you down. Lucky you, we’re here to do exactly that for you!

By testing every single VPN provider, we know which ones work, and which ones don’t in every single case of geoblocking. This way, you don’t have to guess blindly, instead, you can go with the perfect VPN provider that you know will work from the get-go!

Get NordVPN and unblock anything!