How to watch Rick and Morty on Netflix

Truth be told, only a handful of TV shows come close to the awesomeness of adult animation that is Rick and Morty.

The Adult Swim show brought us to the sad realization that we are alone in the universe and nothing matters. It may have caused riots at your local McDonald’s by those who had trouble dealing with the fact. And, on occasion, it made us laugh. So much.

That aside, Rick and Morty is finally back for a new season and you don’t need us to tell you how good the first couple of episodes were. The multiverse hopping duo has returned with wittier one-liners, top-notch puns, and well-layered humor to keep you wanting more of their interdimensional madness.

So there you are, wanting to get some new catchphrases to annoy Bob at work tomorrow (Bob just doesn’t get it) when you realize – you have no clue where to watch the new or any season for that matter.

We’re sure Rick would have some depressing and eccentric wisdom to share on the matter, about all of us being docile lambs to the corporate streaming slaughter, subscribing to as many streaming platforms we can, so we have something to look forward to all day, and something to not think about the wasted lives we live at night, to then start the circle over, and over, and over again (wow, this got dark).

Hey, Rick, it’s not like we have Interdimensional Cable to turn to… Or do we?

Turns out, we do! And its name is Surfshark!

Why in the multiverse isn’t Rick and Morty on Netflix?

You’d think a show as big as Rick and Morty would make its way on Netflix, right? – Wrong! 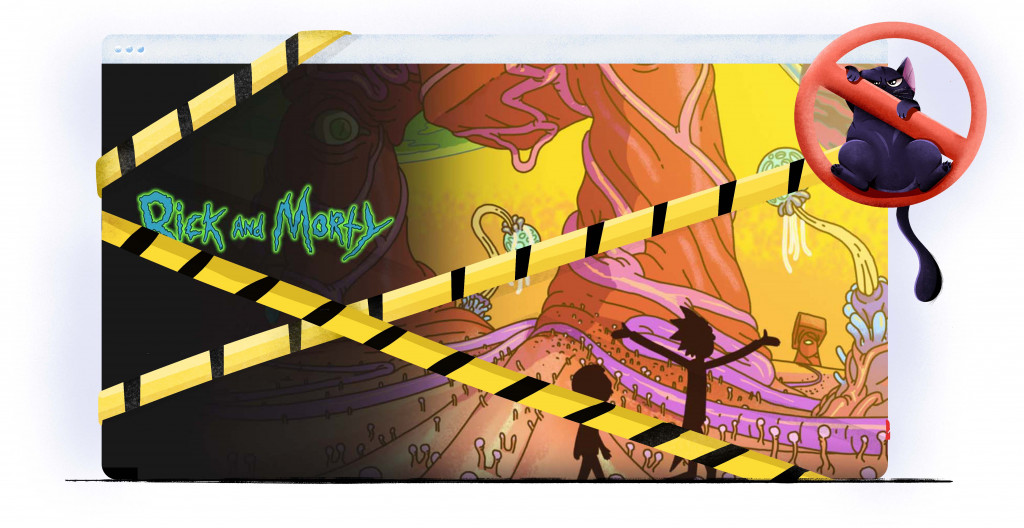 Streaming rights are as complicated as the rules of time travel. And they get passed around more than Mr. Meeseeks’.

So before you get your hopes up and think you’ll be able to kick back and stream all of the seasons yet again, you should know that you will find neither Rick nor Morty on there. All because of the damn streaming rights.

US fans can either catch the show on Adult Swim, the adult nighttime run on Cartoon Network, or wait to stream it on Hulu or HBO Max.

But… If you’re a true Rick and Morty fan, you should know that nothing means anything, nothing is constant, and everything is an artificial construct.

Apparently, this applies to Netflix libraries as well.

Wait. I’m confused. Is Rick and Morty on Netflix?

Much like Schrodinger’s cat, Rick and Morty both is and isn’t on Netflix.

See, Netflix libraries are pretty much like hopping through portals. Every country has its own catalog, and they are all different.

So what could be absent in your dimension’s catalog might be present in another.

Translation: While the show isn’t on American or Canadian Netflix, it is available in other foreign Netflix libraries.

Need to know more about the Netflix multiverse?
Read all about it!

So, where is Rick and Morty available on Netflix?

A bunch of places, actually.

At the time of writing, all of Rick and Morty’s seasons are available in the UK, Australian, Indian, French and Spanish libraries. Just to name a few.

And because Netflix is nice like that, you don’t even have to learn Telugu to tune in – you can always watch the shows and movies in their original language.

Ahhh, if only you could unblock it and enjoy all the mind-snapping dimension-hopping without having to take out 57854 more streaming subscriptions to fill that growing void inside.

Fortunately, you won’t have to switch dimensions and kill the other version of you to enjoy some Rick and Morty on good ol’ Netflix. So that’s a positive.

No, hopping Netflix libraries is much easier than string theory. And the best part is, we’ve done all the work for you!

All you need is the right VPN, which, come to think of it, works pretty much like a portal gun in the streaming service dimension.

Looking for a guide on how exactly this portal gun works?
We've written one for you!

Did someone ask what the best VPN for the job is? That’d be Surfshark!

In all seriousness, though, Surfshark is THE VPN you get when streaming unblocking is what you’re after. It can crack any Netflix library faster than you can say “Pickle Rick”, and get you streaming all of the Rick and Morty seasons you could ever want.

On top of that, Surfshark also hooks you up with:

Need some more convincing?
Then check out our review

Nobody exists on purpose, nobody belongs anywhere, everybody’s going to die, come watch Rick and Morty on Netflix.

And that’s immediately the best conclusion we have ever written.

So if you want to catch the latest adventures of everybody’s favorite duo, don’t be a Jerry, do yourself a favor, get Surfshark and get riggety riggety wrecked, son.

(How many of these can we fit into the conclusion?)

Besides, you won’t be limited to just Rick and Morty. Surfshark will be your own personal Interdimensional Netflix, allowing you to enjoy virtually every title Netflix has to offer worldwide.

And that’s the waaaaay the news goes!