9anime Not Working? We can fix that!

Anime lovers know that finding a streaming platform with access to exclusive titles is as hard as softening up a tsundere.

Netflix, Hulu, HBO Max, Crunchyroll, ConTV – all of these platforms might have a decent selection of anime on them for the uninitiated, but never enough, never all of it. So, whenever something that can fill that insatiable hole with anime goody-goodness comes along, we treasure it. And that’s where 9anime fits in.

This sanctuary was where all the otakus could access all their beloved shows and movies without paying a fee. And, no ads! [Well, unless you count all of the many many ads…]

For years, 9anime was to anime fans, what Putlocker was to everyone who couldn’t afford HBO. But much like the latter, lots of us having trouble accessing this faithful platform as of late. So is that it? Is 9anime facing an ending of GetBackers’ levels of disappointment?..

Well, that may not be the case just yet. So let’s see what’s up.

Don’t want to read till the end? Grab CyberGhost and access the real 9anime!

How should we put this…

So, 9anime, like most other free streaming sites of this nature, doesn’t exactly have rights to everything in its catalog. And with anime rights holders being tougher than HBO originals, access to the website is being blocked worldwide, and dependant fans are losing out.

And it doesn’t even matter anymore if the country you live in is pro-anime, or an anime-hater, these days you are going to have to put in the work to access this baby.

It’s difficult to deem 9anime as illegal or legal. Mainly because you aren’t illegally accessing the site or consuming its content.

But, since these types of sites don’t generally have streaming rights anyway, they have all kinds of shows you can stream. So, it is a tad unfortunate for the mega-rich corporations that own the content.

On the other hand, with these types of streaming websites, you never know which shows the platform has the rights to, and which ones it doesn’t. It might very well be Toei Animation going after one particular show, while everything else might be fair play.

Regardless, for those who don’t want to subscribe to a billion different platforms to finally get all of the Naruto seasons in one place, this is absolute salvation.

That’s also a bit of a loaded question.

Generally speaking, 9anime is quite a legitimate website that is managed pretty well. But, since it gets taken down quite often, with several people creating clones, users need to be wary of the imposters.

The cloned 9anime websites mostly want to phish people instead of letting them watch Attack on Titan in peace. Moreover, they also have ads running on their page, and it may not be a great idea to click on them, even if the website works fine.

So, proceed at your own risk. And be smart about how you choose to do so.

You should know the answer to this by now. But if you don’t – no biggy, that’s what we’re here for.

What you need to access 9anime are two main things:

So, don’t worry about the link since we can get you the real one. This one’s on the house: 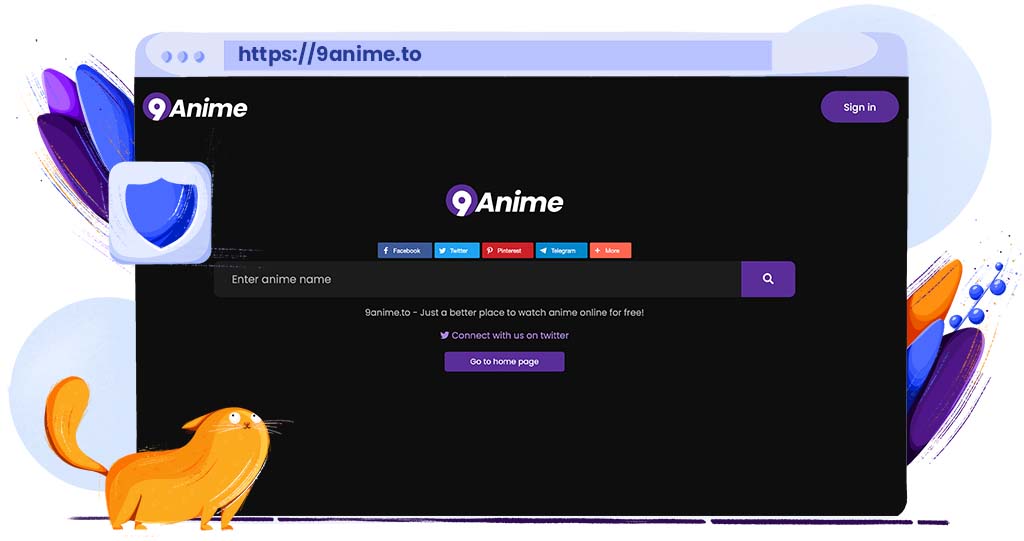 As for that other one. Well, you can go by switching ISPs, but chances are, all of them are blocking 9anime at this point. But there is a much better, and much less involved solution: a VPN!

What on earth is a VPN?!
Don't panic! We've got the answer to that as well!
Here's all you need to know

So, after conducting thorough research, we choose you, Pikachu! Sorry, we meant CyberGhost. But it’s also yellow and CyberGhost sounds like something out of anime anyway. Coincidence? We think not, good sir (or madam)!

We have many reasons to back up our choice. So while you’re visualizing what kind of anime CyberGhost would have been, we’re gonna quickly bullet point this and figure you convinced:

Still not convinced of CyberGhost's greatness?
That's what our review is for!

But that’s not all of it. There’s a lot more where that came from!

And, if you’re paranoid about surfing free streaming sites, CyberGhost has got you covered! It comes with an antivirus and a scanner that weeds out malware. So, even if you come face to face with fake 9anime websites, CyberGhost’s forcefield has you protected!

The power of CyberGhost and anime on your side!

All in all, 9anime is a website that is quite a treasure trove for us anime lovers. So it’s totally understandable that people are looking for ways to access it.

But why risk losing your favorite anime streaming website, or catching a virus on a fake one, when there’s nothing stopping you from enjoying it?

So get CyberGhost, and let no one get in the way of your anime ever again!