The Oscars are coming up: Watch the event for free!

Wait, Oscars? Did anything even come out last year?

2020 was such a gray year for all industries. The year was devoid of the traditional glamorous movie premiers and the usual box office hits.

The movie industry took a major blow as production companies faced the hard choice of delaying production or holding onto their finished projects.

The 93rd edition of the Academy Awards is set to take place on Sunday the 25th of April over two locations in Los Angeles – the Dolby Theatre and Union Station. 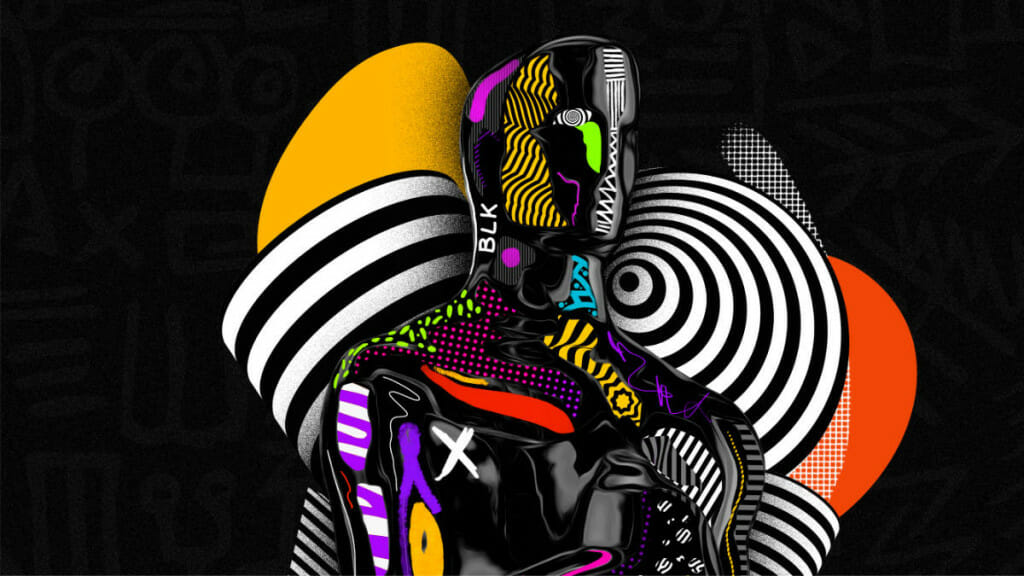 Changes made to the Oscars

In response to the COVID-19 pandemic, the Academy made a couple of changes to the biggest event in the film industry.

It was confirmed that movies that had initially missed the window for theatrical release would be considered.

It was also announced that the ceremony would be put off until April 25, which is two months late.

The deadline for eligibility was extended too from December 31 to February 28 to cover the best films of 2020 and early 2021.

The nominations were announced mid-last month by Priyanka Chopra and Nick Jonas in a live stream.

Don’t worry if you missed it, you can still check out the list:

Well, most likely no one. No official announcement has been passed, but we don’t expect the ceremony to have a host. If the show goes hostless, several presenters will probably lead the event.

Oscar streams are always a pain.

In the US, the rights to air the event belong to ABC, and let’s say, they are just not willing to share.

If you have ABC as a TV channel, then you’re good to go. You can also choose to stream the ceremony online on the platform’s website, but this is not straightforward.

For starters, the option is available in select regions, and to get access, you need to sign up with a cable company or streaming service that offers the same. The options on the table at the moment are Hulu Live TV [$64.99/month], YouTube TV [$64.99/month], and AT&T TV [$69.99/month].

British fans can watch the whole event on the Sky Cinema Oscars channel. Not so fast, though. The channel is only available as part of the Sky Cinema package, which costs £11/month.

In Canada, you can catch all the glam on CTV or stream the event on the network’s official site. For the latter, you will need to choose a TV service provider. 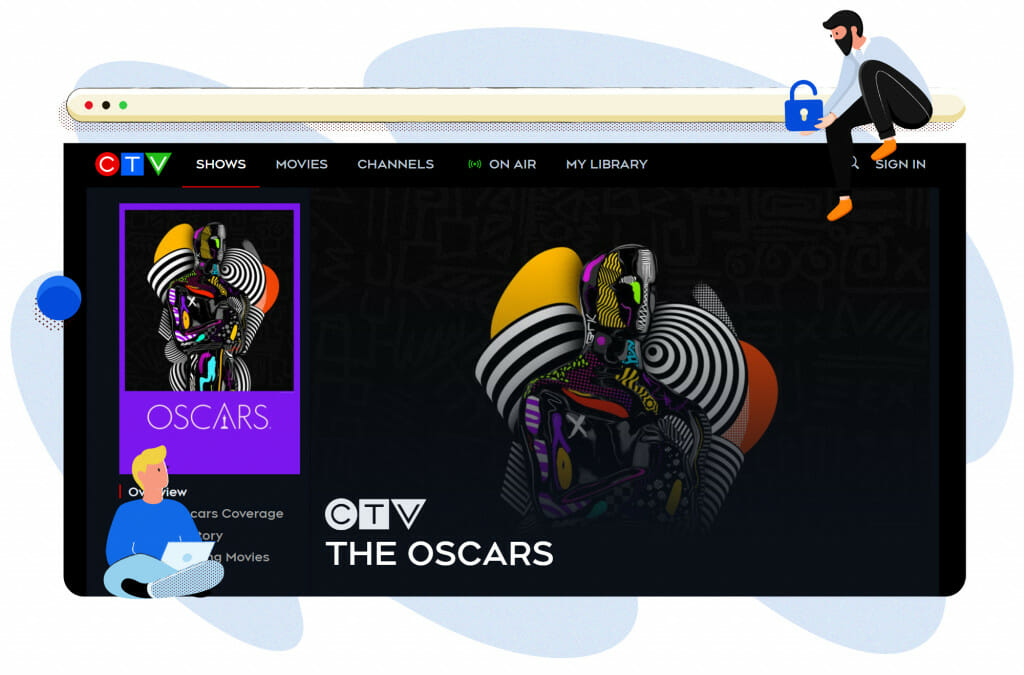 Now, paying for a whole service or taking out another subscription on top of the one you have to watch one event doesn’t sound good.

Fortunately, you won’t have to go through this inconvenience.

Is there a way to watch the Oscars for free?

You might be hard-pressed to find the Oscars on TV or find some shady livestream on the internet.

But who’s got time for that in the middle of the night anyway?! ?

Besides, most of them get taken down even before the broadcast peaks (no joke, it happens every year).

Luckily, you don’t have to miss even a minute of the coverage. We have done our digging and found the only confirmed place that will be streaming the 93rd ceremony for free.

You can tune in on the Australian 7Plus streaming platform and watch the event online without subscribing to any TV package. Heck, you don’t even have to worry about the language barrier. 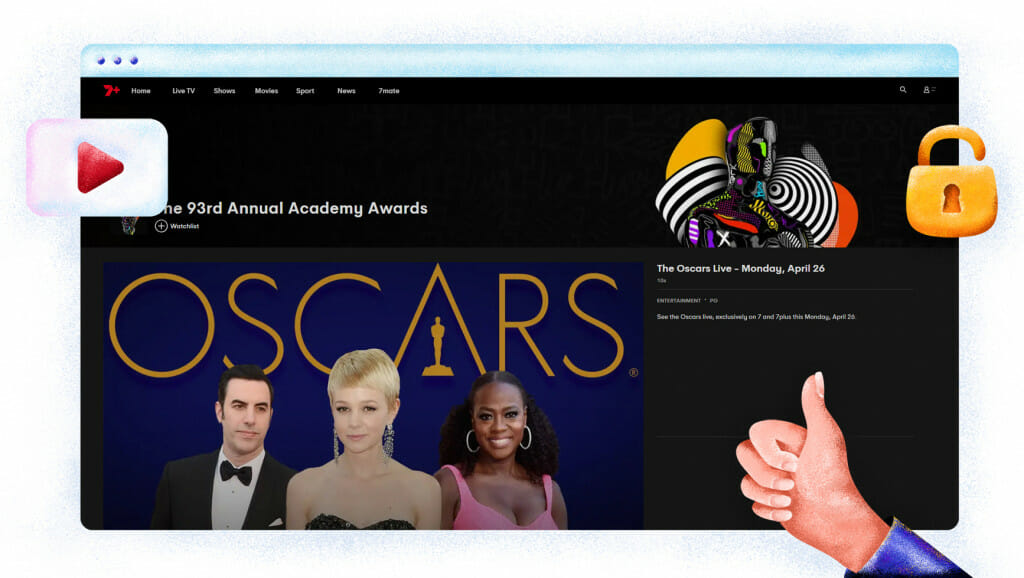 So how do you go about it?

It doesn’t matter if where you live, tuning in is easy peasy lemon squeezy.

If you’re outside Australia, all you need is a VPN to change your location to Australia.

You can then tune in at the appropriate time and scream at the TV if Tenet doesn’t win Best Production Design. It has to win something even if we didn’t understand the movie, for the most part, right?

But not just any VPN with a name that you’re probably coming across for the first time.

Going with a weird and shady VPN provider at the very last moment is the equivalent of releasing Cats during the Oscar-fishing season. It will just land you in front of the most boring blocked screen ever (seriously, 7Plus, step up your game) 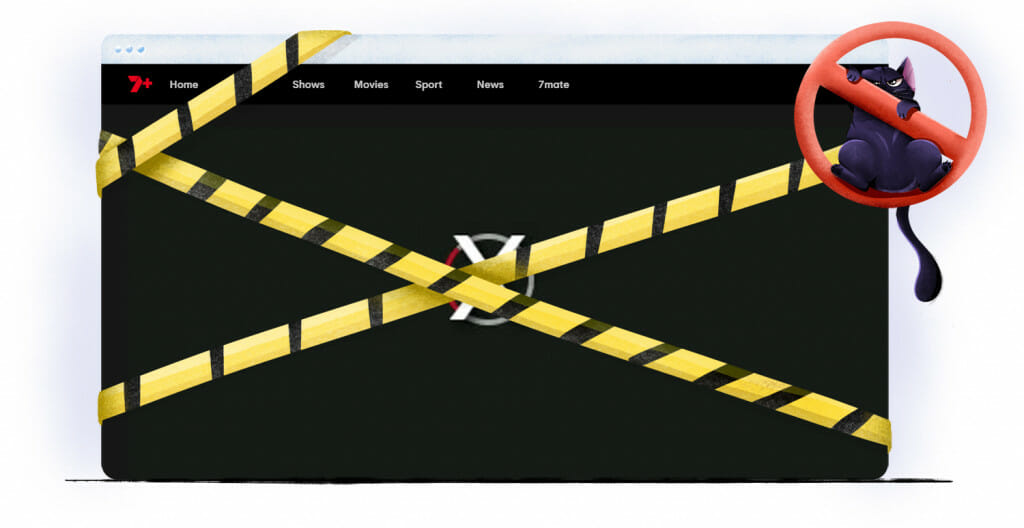 Even though many providers have servers in the land down under, Australia is halfway across the globe for most. That will inevitably lead to such miserable streaming speeds that you will end up finishing the broadcast in July.

This is precisely why you need a reliable VPN.

What is the best VPN to stream the Oscars?

The obvious answer is NordVPN. And we do not say it lightly.

And the Oscar goes to… NordVPN!

There are a few things going for NordVPN.

Still not convinced?
Find out everything there is to know about the world's leading VPN!
Read our full Review!

The next best thing

Don’t feel like going with the most popular VPN in the world?

No worries. We’ve got you covered because we do our job and test every possible solution.

The next best thing is Surfshark.

The people’s choice award for the best VPN!

Surfshark
Find out everything there is to know about the world's leading VPN!
Read our full Review!

While the usual red carpet won’t be present this time, there is still much to look forward to.

Grab a VPN and get ready for the full Oscar experience, not to mention being stunned by some grand mask and outfit combos.