How to Stream Wimbledon 2022 Live and Free

It’s Friday then… there is Saturday and Sunday (insert Mufasa’s reaction), but for those of us who love tennis, it is the French Open, Wimbledon, and then the US Open to wrap up the Calendar Slam.

The French Open (Roland-Garros) got underway this week and will run until June 5. This clay court season will then usher us into the grass outdoors of the prestigious and iconic Wimbledon set to start on June 27. Though the former is arguably the most demanding, it is Wimbledon’s glistening silver-gilt cup or sterling silver salver that almost all tennis professionals hope to win.

Get ExpressVPN and stream Wimbledon for free!

In the women’s single, Ashleigh Barty defeated Karolína Plíšková to win the Venus Rosewater Dish in the absence of defending champion Simona Halep who didn’t compete due to an injury.

Djokovic’s win marked his sixth Wimbledon title and, overall, completed his second decade of major titles – to equal the Swiss Maestro Roger Federer and King of Clay Rafael Nadal. The Serb will once again be on a journey to defend his title, while Naomi Osaka and Emma Raducanu are expected to put up a show on the women’s side.

Ash Barty, however, won’t be gracing us with her presence following her shocking and unexpected retirement after the Australian Open. Nonetheless, this year’s tournament is set to be an interesting one, not to mention Wimbledon will be celebrating its 100th anniversary in the All-England Lawn Tennis and Croquet Club.

With that out of the way, let’s get straight into how and where you can watch the action.

Who is broadcasting Wimbledon in 2022?

Wimbledon is arguably the most popular and prestigious of all tennis tournaments and this translates to a massive viewership demand. A few cable channels get exclusive broadcasting rights in different regions to maximize returns.

In the US, ESPN has held rights to broadcast the Championship – both men’s and women’s – since 2012. We mean, they have an entire Wimbledon Channel for streaming, you guessed it, Wimbledon specifically. So that is the perfect place to follow just about everything surrounding the competition and beyond. 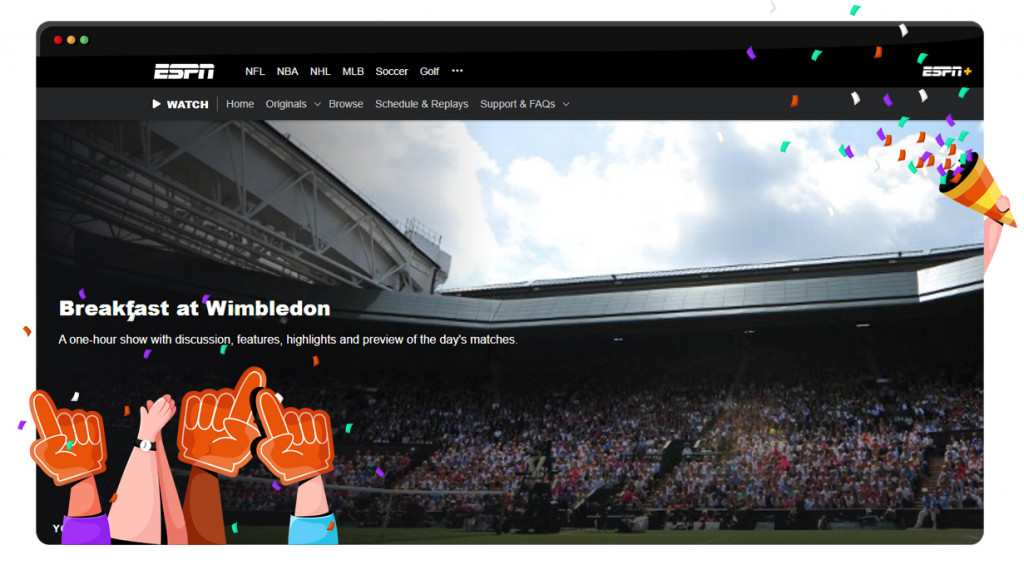 Neighbors up north in Canada can follow the competition on TSN. Aussies, on the other hand, have Stan Sports as the go-to option to watch the action from Wimbledon. 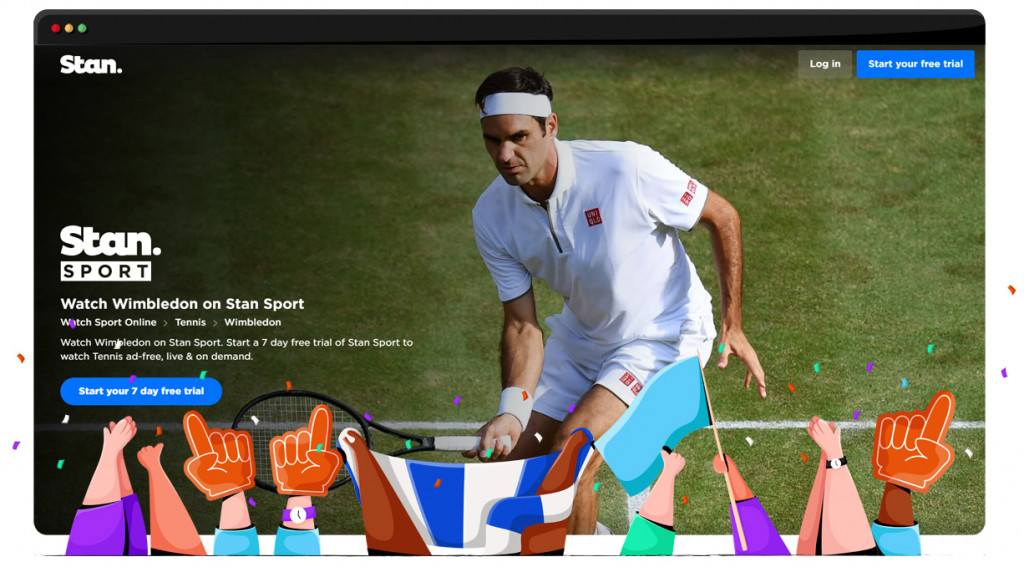 How can you stream Wimbledon in 2022 live and free?

Now, the Wimbledon streaming options you have in your neck of the woods might not be the best ones. But some countries are actually broadcasting the entire competition for free. No cable subscriptions, no streaming platforms for a monthly price, no nothing!

There is one problem that ties all of the tennis streams – probably all of the sports streams together – and that’s geo-blocks. Meaning, the streams and broadcasts may very well be free, but they are only accessible to the residents of those countries.

Is it fair? Well, it kind of is. But when you’re the fan that can’t watch your favorite sport while others can, it definitely is not.

And that’s exactly where VPNs come in – to right this wrong. However, to stream a sports tournament as coveted as Wimbledon in its entirety, you need a crazy powerful VPN. And there is but one VPN that can be called that: ExpressVPN.

Want to know what makes ExpressVPN the best?
Check out our completely new and revamped review!
New ExpressVPN review

Who is broadcasting the Wimbledon championship for free in 2022?

Wimbledon is tough. And, as you would expect, free Wimbledon streams aren’t just lying around.

But, once again, we have done all the heavy lifting for you and scoured the Internet for every single way you can stream the tournament as live and as free as one can. So, here are your options:

Aaah yes! The famous British streaming platform is coming to the rescue again, having signed a new three-year deal that extends its rights until at least 2026. As usual, it has all the rights to Wimbledon and will be streaming the whole tournament for all the Brits. 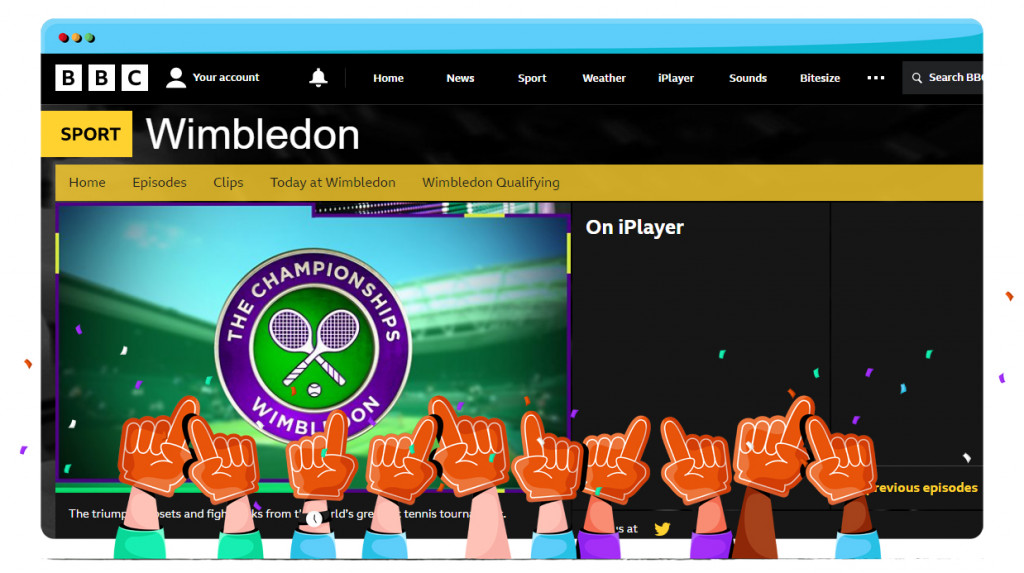 If you reside outside the UK, you’ll need to bypass BBC’s blocks and ExpressVPN is the ultimate key:

Stream all the British TV you want with ExpressVPN!

Zattoo is an awesome platform that allows you to watch select content from select platforms for free. In this case, think of it as another way to stream BBC, but through Switzerland. 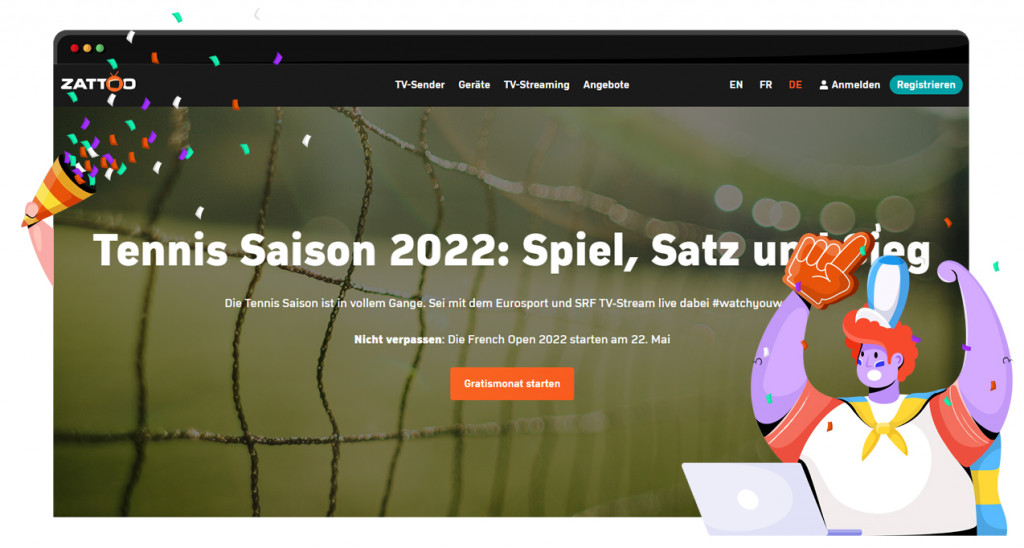 It doesn’t matter how many borders you need to cross; ExpressVPN will still get you there and here’s how:

There’s no streaming platform to get you ready and well-prepared for the 2022 Wimbledon as 9Now. This free ad-supported service has compiled together highlights of all the matches from last year’s tournament. 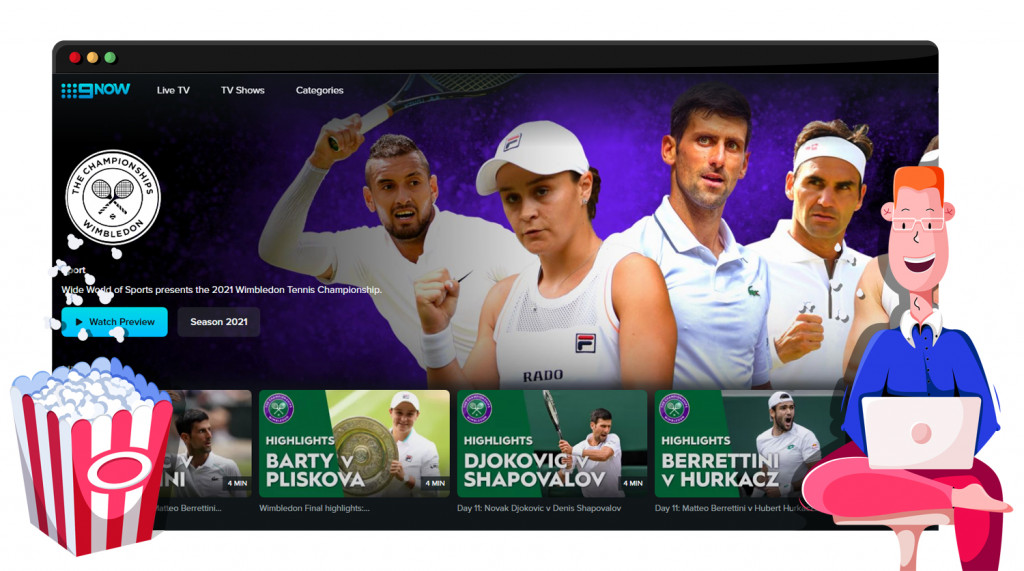 Aussies will definitely be at home watching this year’s edition on 9Now.To follow the entire Championship (in English) outside Australia:

For the really adventurous who just can’t sit still without taking risks, there is yet another option to stream the tournament from the UK. Amazon Prime will also be broadcasting the event this year, but only in the UK, and as you probably know, Amazon Primes are not created equal. Amazon Prime is also no Netflix, so you can’t really throw a switch and end up in an entirely new library of streaming goodness. 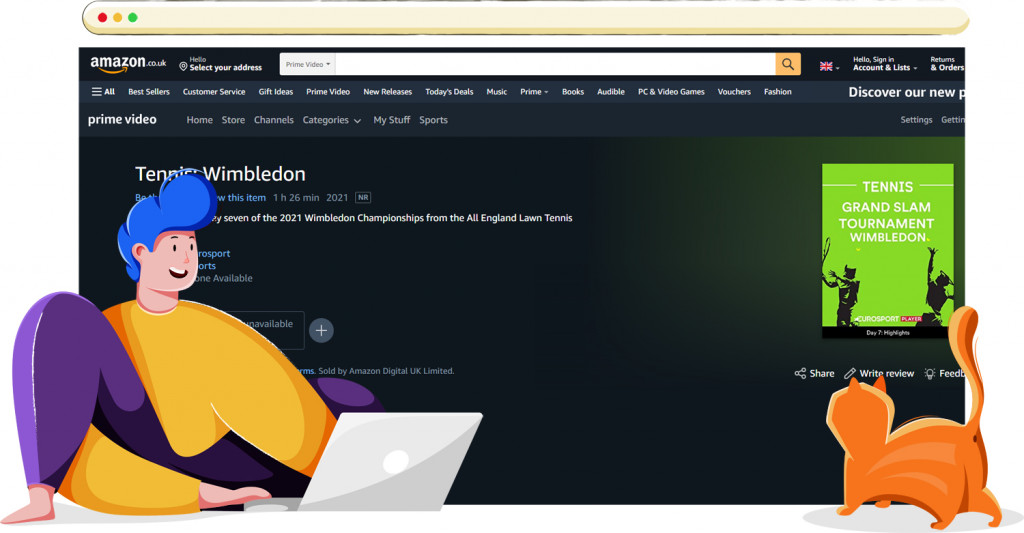 So why are we even recommending this even though Amazon Prime screams premium? Well, Amazon Prime has a 30-day trial version everywhere, so you can technically watch the entire competition (along with everything else Amazon Prime Video UK has to offer) during the trial period for free!

Here is how to go about it:

Can Djokovic put the Australian Open drama behind and make it a fourth consecutive?

All eyes will be on Djokovic, who failed to make it a record nine titles in the Australian Open earlier this year. The Serbian will be looking to put his disappointments in Australia aside to bag a sixth Wimbledon title. It, however, won’t be an easy path with the likes of Berrettini and Nadal equally eyeing the pineapple trophy.

The women’s single will also be another affair to follow closely. Iga Swiatek, Osaka, and Raducanu will battle it out as favorites to leave their mark at the All England Club.

Either way, this is sure to be one exciting competition! And now you are fully prepared to not miss a beat of it!