How to Turn GOG into the Perfect Gaming Platform

If you’re like most gamers, you’re in the millionth iteration of the GOG Vs Steam debate. If you’re anything like me, you’ve run out of original swearwords for both platforms. It’s difficult to choose a favorite when there are so many flaws to wade through.

GOG‘s achievement tracking belongs in the Paleolithic age, but Steam‘s support staff took an arrow to the head back when Skyrim was actually a thing. Steam takes six million years to download a game, but GOG takes six million years to grok your support requests. Steam doesn’t sell you games. It sells you the right to play games. GOG sells you games outright, but then it dumps them every time the platform upgrades (can anyone say “capped internet, yah damned moron?“)

What’s that? No. I’m not resentful at all. Why do you ask?

GOG is a subsidiary of CD Projekt Red (CPR), so it’ll probably never compete with Steam’s product range. Still, CPR isn’t exactly a middle-grade-developer. Geralt was already tripping out in the Cave of Dreams back when Ulfric Stormcloak was still learning how to tell the difference between a dragon and a sprig of nirnroot.

GOG’s developers are purists, so they put marketing behind passion. If your gaming habit is emptying your M&Ms budget, head to GOG. Odds are good that you’ll save a few cents.

Get the best deals on your favorite games!

Can You Get GOG Games Even Cheaper?

GOG uses a dynamic system that inflates or shrinks your price depending on your location. And now you finally have an excuse – I mean reason – to move to Bali, and it’s called “Cyberpunk 2077“. If you’re not willing to move to the other side of the world for a price cut, you lack commitment, but we’ll forgive you just this once.

If you’ve been reading this blog for a while, you’ll already know there’s a solution that doesn’t require a 13-hour flight: A VPN with foreign servers so that you can access the cheapest prices in the world.

What’s the Perfect VPN for buying games on GOG?

Don’t expect to trick CPR’s developers easily. These are the people who singlehandedly reinvented the RPG genre, so they know what they’re doing. Still, if you can kill a giant on “Death March” you can work out how to use a VPN. You just need to choose the right product.

Some users have had luck with ProtonVPN, but we prefer Surfshark.

Surfshark is one of the few VPNs that actually has servers (working servers!) in Russia where games are consistently cheaper, and there are precious few VPNs that do. 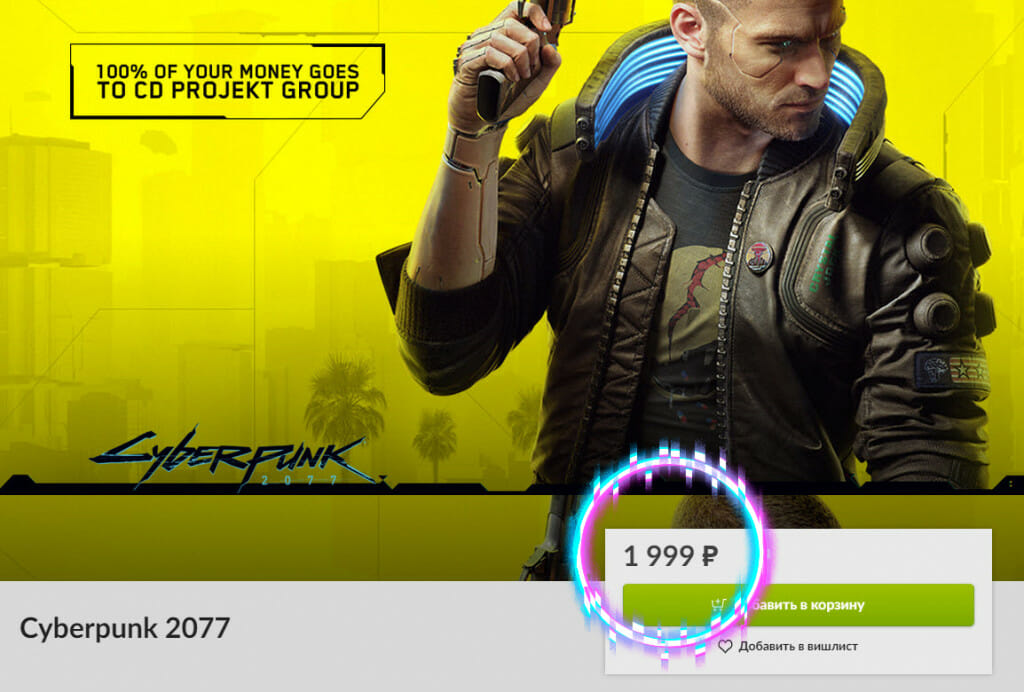 Sure, there are other VPNs with Russian servers, even free ones. And while free VPNs won’t even get you past the beefy GOG bouncer (they will succeed in selling your information or bandwidth though), even the premium ones lack the stability and the speeds of Surfshark.

And let’s face it, you don’t have it in you to wait a week for playing the game.

Surfshark is the best budget VPN on the market today. It’s quick, slick, and invisible.

Its Camouflage Mode disguises your connection as everyday traffic, so even CPR won’t be able to trace your network. It doesn’t use decryption, which is a common red flag, so all you need to do is use the “OpenVPN” button to reap the benefits. You’d have a harder time stepping out of the shower.

Surfshark also lets you change protocols to improve your wireless performance and streaming power. If you need to fight your way through the Great Firewall restrictions, the Shadowsocks proxy is your best friend. If you need to spoof your location convincingly, it even has GPS powers that trick GOG into treating you as a foreigner.

Surfshark
Get to know all Surfshark's incredible features!
Check out our Review

The only thing Surfshark can’t do is knit scarves. But it’s probably going to happen with the next update.

GOG for Queen and Country

Steam is still recovering from server mayhem after Cyperpunk 2077’s weekend release, just as it had to with Lords of Mayhem… and Overload.. and Call of Duty. As for GOG, it’s just sitting back on its sofa and sipping its tea.

So go get Surfshark and go get the latest CD Project Red sensation everyone is talking about and kick-start your streaming career while it’s hot!